She said yes! Chrisley Knows Best star Chase Chrisley is engaged to girlfriend Emmy Medders just five months after getting back together.

“I am the luckiest man in the world, being able to call you mine forever is a blessing straight from God,” Chase, 26, announced via Instagram on Friday, October 21. “You are the sunshine when it’s dark, you are the rain when it’s dry. I love you more than life itself and can’t wait to live forever with you! To you, my love! Thank you for taking me FOREVER!!”

Chase shared photos leading Emmy, 27, down a path of red rose petals to the center of a baseball field with a giant heart shaped in the form of the gorgeous blooms. He got down on one knee to propose, as Emmy was seen putting her hands up to her face with joy. She showed off the oval-cut diamond ring in one of the snapshots.

The couple began dating in 2020 and their relationship unfolded during season 9 of Chrisley Knows Best, though the pair later split. “We just thought it would be healthier and better for both of us,” Chase told Life & Stylein August 2021, about going their “separate ways.”

“I think that it just came down to we kind of looked at like what we wanted in life, and right now, it’s not matching up,” the Georgia native said at the time. He called Emmy an “amazing woman” and “great person” while wishing her “nothing but the best” moving forward but admitted “you never know” about the possibility of the pair getting back together.

Sure enough, the couple got back together as Emmy posted a photo next to a smiling Chase on her Instagram page in April. A month later, the USA network star shared a series of pictures with Emmy on a romantic vacation in Florida. He simply wrote his girlfriend’s name in the caption next to a blue heart emoji, making it clear they were back on.

Chase had previously spoke about tying the knot with Emmy in February 2021 prior to their split. “She and I have both talked about it. I’m definitely going to end up marrying her, probably,” Chase told Us, adding, “If she wants me. If she’ll take me, I’m all for it.” 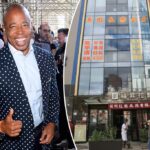 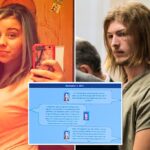