The state of President Biden’s mental health stirred up debate on Friday morning’s “The Breakfast Club” radio show — with one co-host suggesting the commander-in-chief get tested for dementia.

The back-and-forth began when host Charlamagne tha God and co-host DJ Envy rattled off a list of reasons why they feel Biden is losing his grip on reality and should consider retiring as a one-term president.

It was reported earlier this month that an announcement from Biden of a second White House run seemed imminent.

DJ Envy, whose real name is Raashaun Casey, immediately agreed and suggested that Biden should be tested for “dementia” before any re-election bid announcement, which sent his co-host into a fit of giggles.

Both Cross and Rye appeared taken aback and rejected the duo’s implications that Biden isn’t fit for office.

“Have you seen something that suggests that he has dementia?” Cross asked.

“I saw him talking to a ghost!” Charlamagne quips.

The radio hosts may have been referencing the September incident when Biden repeatedly looked for Rep. Jackie Walorski in the crowd of a White House event one month after she was killed in a car crash. The infamous gaffe spurred speculation over Biden’s mental capabilities.

DJ Envy listed off several other reasons he believes the president is suffering from dementia, including frequently appearing confused and reading cue cards as part of his speeches.

“To me, it looks like he has early signs of dementia,” DJ Envy said.

Cross and Rye tried to shut down the conversation by explaining that Biden’s gaffes are normal for a busy, high-ranking official.

“Well let me ask you think, would you rather have Biden with dementia or Trump with all his issues,” a fed-up Cross asked.

The group continued debating briefly before ultimately agreeing that any president, regardless of age, should be mentally evaluated before assuming “the highest office in the land.” 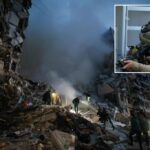 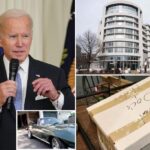