The hottest fashion trend of 2022 for Hollywood stars seems to be the “naked” look. Actress Bella Thorne kicked things off in March by wearing a skintight red dress with the design of a woman’s bare body on it and since then other celebrities have followed suit with the racy style.

Bella’s red illusion frock by Spanish designer Sergio Castaño Peña made her appear nude without actually being in the buff, as it showed the clear outline of breasts, nipples, a belly button, stomach and thighs. She wore it to a screening of the film Morbius, and it has since become a must-have item.

Iggy Azalea donned the identical dress to wear while celebrating her 32nd birthday on June 7. She posed wearing the daring red gown that looked as if it had been spray painted onto her body in an Instagram snapshot where she wrote, “Huge hug and thank you” to Sergio “for making sure my dress arrived just in time!” The rapper’s hourglass curves made the dress look like a total smoke show in her birthday portrait.

Demi Lovato is also a fan of Sergio’s nude optical illusion dresses, as they donned one in green and yellow hues during a press visit to New York on June 13. The singer showed how it looked from the backside, where it appeared their bare bottom and back of their thighs were on display in golden tones.

They tagged the designer in a carousel of Instagram snapshots while showing off the racy look. But when the “Sorry Not Sorry” singer stopped by The Tonight Show With Jimmy Fallon, they covered up the NSFW dress with a dark black blazer.

Kylie Jenner set pulses racing when she wore a very daring bikini by Jean Paul Gautier that made it appear as if she were topless. The reality star showed off the look in a series of June 6 Instagram photos from her vacation in Southern Utah where she wore the flesh-colored swimsuit top featuring two very accurately drawn nipples on it.

Singer Tov Lo also found inspiration in the “topless top,” wearing a nude illusion shirt with a very realistic print of bare breasts on it paired with a blue suit in a June 10 selfie, which she captioned, “Almost a lady.”

Gaultier’s nude illusion looks were on display thanks to two supermodels at a November event honoring his collaboration with the brand FWRD. Kendall Jenner chose a vintage dress from the 1990s, while Roz donned the “naked” gown in a daring lavender number.

Scroll down for photos of stars wearing racy “naked” outfits. 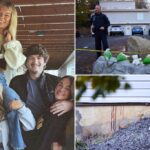