A US Customs and Border Protection officer was accidentally shot and killed while instructing a firearms course at a Miami-Dade gun range Wednesday.

The officer was shot just before 11 a.m. at the Trail Glades Range in western Miami-Dade County, Miami-Dade police said.

He was airlifted to Jackson Memorial Hospital’s Ryder Trauma Center, where he succumbed to his injuries, police said at a press conference.

Customs and Border Protection spokesman Michael Silva confirmed the officer worked at the range and at Miami International Airport, but did not reveal additional information on the shooting.

Sources told Local 10 News that the shooting happened during a “building search training.”

Two instructors were conducting a demonstration when one accidentally shot the other in the chest, the sources said.

Dario Pederajo told the outlet he was shooting in the range when police officers surrounded the area and ordered everyone to put their guns down.

“On the police range side it’s mainly Customs and Border (Protection), they come on Wednesday for practice,” Pederajo said. “Several police officers came running over to the civilian side of the range, where the main office is, and said someone had been shot, stop shooting.” 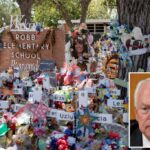