The Virginia state trooper accused of “catfishing” a 15-year-old girl and then killing three members of her family fatally shot himself using his own service weapon following a law enforcement chase.

Austin Lee Edwards, who posed as a 17-year-old boy online to solicit nude photographs from the teen, killed himself with during a shootout with San Bernardino sheriff’s deputies in late November.

Edwards traveled across the country from Virginia to the Riverside home of the teen. After shooting the girl’s mom and grandparents dead, authorities said he set fire to her home and drove off with the girl, eventually killing himself.

Virginia State Police said this week that Edward’s hiring was the result of “human error” after it was revealed that he had been detained in 2016 for a psychiatric evaluation over threats to kill his father and himself. 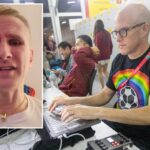