Madness, murder, mayhem and betrayal! The Traitors brings a refreshing form of competition within its star-studded cast, as the “faithful” members must decipher who among the group are “the traitors” as they all race against the clock for a large cash prize. Excited viewers have been waiting for the mysterious show to drop and are *dying* to know where to watch the series.

Keep reading to learn more about The Traitors’ cast, host, plot and where to stream the series!

What Is ‘The Traitors’ About?

According to the show’s synopsis, The Traitors takes place in “a gloomy castle deep in the remote Scottish Highlands.”

Three people in the cast are called “the traitors” and must “devise a plan to steal the prize from the other contestants, coined ‘the faithful,’” the series’ plot reads. The coveted cash prize equates up to a “potential” of $250,000, per the plot.

The synopsis continues, “But the traitors are intent on stealing the prize, and in the dark of night, they’ll be picking off the faithful one by one. Meanwhile, the faithful must watch their fellow players’ every move to try and reveal and banish the traitors from their midst. It’s a race against time to see who will be left to claim the prize at the end of the game, and no one is safe.”

The Traitors is also based on the famous Dutch show under the same title.

Where to Watch ‘The Traitors’

The new reality series will be available to stream on Peacock. All 10 episodes drop on the platform on January 12, 2023.

Who Is in ‘The Traitors’ Cast?

However, TV stars aren’t the only cast members who will be playing this ultimate competition. Former Olympian and award-winning swimmer Ryan Lochte is also part of the group.

Aside from the famous faces, several non-A-list contestants will also be part of the show.

Who Is the Host of ‘The Traitors’?

What Did the ’Traitors’ Trailer Reveal?

The trailer, which dropped in early January 2023, opened with the ominous castle in which the show takes place, “where the faithful reside.”

Based on the teaser, it appeared the 20 contestants were tasked with sitting around a large table to try to decipher who among them were the three traitors. However, it also looked like the “prize-building challengers” also filmed various competitions outdoors.

The trailer even teased “diabolical murders,” eventually revealing a shot of what appeared to be cast members digging graves, which contained people. 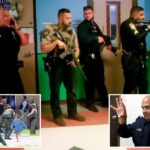 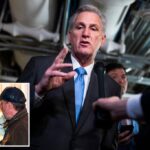