GOLETA, Calif. – Two dogs became lucky dogs on Thursday when Santa Barbara County firefighters pulled the duo out of a flooded creek during a deadly storm.

A bomb cyclone, supercharged by the Pineapple Express, made landfall in California Wednesday, dumping several inches of rain across the state. Almost 4 inches of rain have fallen in Goleta, California, so far, which swelled the San Jose Creek. The area usually sees a quarter of the rain in an entire year that fell in just days, according to the Montecito Water District.

When firefighters got to the scene, they found one dog perched on the edge of a crate. The swift current was twisting and turning the box, forcing the pet to cling to the edge and constantly reposition.

Cement barriers lining the creek meant the pup couldn’t jump into the rushing river to swim to shore, leaving no choice but to hang on.

A three-person rescue team used ropes to pull the dog to the side. They then pulled the dog safely out of the water.

Another three-person swift water rescue team waded waist-deep into the water to get to a second dog.

Video from firefighters showed the rescuers using long poles to anchor themselves. Two tried to block the fast current for the third, holding the dog.

They carried it downstream where they could climb out of the creek, and that dog wasted no time jumping into the arms of the man in orange when the group reached the bank.

Animal control officers toweled off the grateful canine before lavishing a little love on the pet that almost didn’t make it.

Both dogs appeared uninjured, said Santa Barbara Fire, and were happy to be returned to the owner on terra firma. 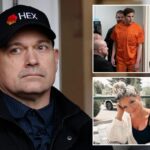 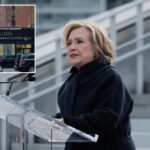