San Bernardino County, California fire crews rescued a family of three from an SUV that was engulfed by floodwaters during a storm on Sunday.

The San Bernardino County Fire Department said crews responded to a swift water rescue near Forest Service Road 1N33 and South Lytle Creek Road in Lytle Creek at about 2:30 a.m. on Sunday after reports of a vehicle stuck in floodwaters with three people inside.

When crews arrived, they found the occupied vehicle in fast moving waters that were several feet deep, which prevented the SUV from driving to a place of safety so the three people inside could get out.

Crew members who were trained in swift water rescues set up for the operation using specialized equipment before entering the waters and saving two adults and a child.

In a Facebook post on Sunday, the department said the patients were tended to by paramedics. All three were uninjured, the statement said, and declined transportation to a nearby hospital.

The department also said none of the firefighters were injured in the rescue.

“Heavy rainfall can cause normally dry washes and riverbeds to become raging torrents in a very short amount of time and it only takes as little as 12 inches of moving water to move a vehicle,” San Bernardino County Fire Department officials said. “Never cross a road that you can’t see due to it being covered by water, remember, ‘Turn Around, Don’t Drown.’” 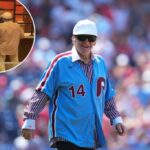 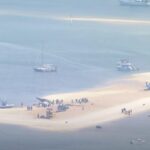