A driver who led police on a wild chase through multiple California counties was finally taken into custody after multiple crashes, a carjacking caught on live television and ending with shots fired, dramatic footage shows.

The pursuit began with a black sedan flagged for a routine traffic stop for failure to yield by Fullerton police in Orange County around 4:40 p.m., KNBC-TV reported. The driver — an unidentified man — refused to stop and the chase was on with the driver swerving erratically through surface streets in Anaheim.

At one point, the driver jumped out of the sedan and tried to break into a parked pickup truck. When he could not steal the car, he hopped back in the sedan and took off before parking in a residential complex, according to KABC-TV.

The suspect then hopped into a white van, but a Fullerton police cruiser pulled up immediately behind the van, trapping the driver.

Undeterred, the driver repeatedly slammed the back of the van into the front of police car until he had enough space to speed away again, nearly hitting another police cruiser head-on in the process, helicopter footage of the chase from KABC shows.

Police followed as the van dangerously continued to drive erratically until the van lost one of its rear tires in Whittier sending sparks flying as he kept his foot on the gas, but disabling the vehicle. The suspect fled the van and took off on foot into a residential neighborhood.

The driver entered a home through a backdoor and was confronted by people who lived there, video shows. A scuffle spilled out onto the front yard of the home, at which one point the suspect could be seen jumping into a white pickup truck and nearly hitting the residents and their dogs as he took off again.

None of the residents or the dogs were injured, according to the report.

The suspect continued to drive recklessly even after the stolen truck lost a front tire, weaving and wedging in and out of traffic in the Hacienda Heights area of Los Angeles County where he crashed into several cars.

A police cruiser forced the truck into a gas station, where the driver crashed and was immediately surrounded by police.

Police opened fire on the suspect, who was believed to be armed with a gun, when he tried to back away to escape once more, KCBS reported.

It’s not clear if the suspect was wounded but bullet holes could be seen in the truck’s windows.

With their weapons drawn and holding riot shields, cops smashed the driver’s side window of the truck and yanked the suspect out of the mangled truck and took him into custody around 6:10 p.m., dramatic video shows.

He was seen being loaded into an ambulance, according to KNBC.

Additional information on the chase and the driver were not immediately available. 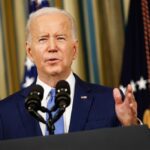 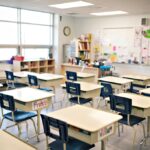