A 22-year-old California woman who was fatally stabbed along with her father outside Kohl’s by a homeless man posted a disturbing message on Facebook a few days before the brutal attack — about being “stressed and scared.”

McKenna Evans and her dad, 54-year-old Ken Evans, 54, were tinkering on their car in the Palmdale parking lot, just north of Los Angeles, when the man attacked them.

LA County sheriff’s deputies have arrested a suspect, who they suspect is homeless.

Authorities said that both the suspect and victims apparently had been living in their vehicles, ABC 7 reported.

A few days before the fatal stabbing Thursday, McKenna revealed she did “not feel safe” about her living situation and that her family needed to “find a home.”

“Hey guys, a lot of things are going on right now, things that are leaving me stressed and scared, and I could really use some prayers,” McKenna wrote on Oct. 23 in a post in which she described her fraught living situation.

“My family still needs to find a home but our case worker hasn’t been much help, my boyfriend and I also need to find somewhere else to live because in the house we are renting a room in, a very toxic person is moving back in and I do not feel safe or comfortable around him,” McKenna wrote.

It is unclear who McKenna is talking about and it isn’t known if the suspect knew his victims.

But the young woman, who was studying for her aesthetician exam, said her family’s precarious living situation had left her “seriously scared and depressed.”

Four days later, McKenna and her father were attacked in the Kohl’s parking lot. The dad was rushed to a hospital, where he died, while his daughter was pronounced dead at the scene.

A witness described the attack on the woman to KCBS-TV.

“The lady was screaming and running back and forth from the parking lot and (someone) stabbed her a couple of times in the back, on the side of her ribs and her stomach,” she said.

The woman fell down and the killer “walked away from it, came back and started stabbing her again,” the witness said. “Then walked away again, came back, kicked her and stabbed her two more times.”

The victims and the suspect had been arguing after the suspect asked for help dealing with an issue with his vehicle, CBS reported.

McKenna’s boyfriend of eight months, Jesse Mercado, told KTLA that he rushed to the scene.

“I wanted to hold her again. It was hard to know that the person who changed my life so drastically — in just one day was taken,” he told the outlet.

Elizabeth Evans, the victims’ devastated wife and mother, said the unnamed suspect “smirked” as he was led away in handcuffs.

“How dare he? I hope he never gets out of prison,” she said.

Elizabeth said her husband had been planning to move to Missouri and had been trying to spend more quality time with his youngest child before leaving.

“That was Ken — a risk-taker, always adventurous,” she told the LA Times.

Their father and daughter’s deaths come as recent crime statistics show several major US cities, including Los Angeles, are on track to surpass last year’s already shocking rates of violent crime. Over the past year, the number of homicides in the city has spiked by 7%. 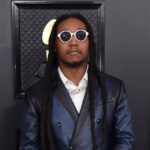 How Much Money the Migos Rapper Had 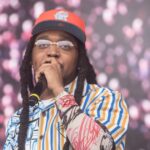