The shredded Washington DC deputy mayor who was caught on camera allegedly grabbing a man by the throat in a gym parking lot earlier this month has resigned, DC Mayor Muriel Bowser announced Wednesday.

Chris Geldart, the former DC Deputy Mayor for Public Safety and Justice, had been on administrative leave after video footage circulated of him angrily confronting a trainer at the gym on Oct. 1. He was charged with assault and battery in the incident.

At a press conference on Wednesday, Bowser said she was “saddened to say” that she had accepted Geldart’s resignation.

“I am proud of the work we’ve done together over the last eight years and I am immensely grateful to Chris for his service to the city,” Bowser told reporters. “Chris has been a very capable and effective public servant and I’ve gotten to know him over the years in several roles.”

Geldart, 53, was appointed to his position by Bowser in January 2021, according to WUSA.

He had previously served as a leader of Washington DC’s COVID-19 emergency response efforts and director of the city’s Department of Public Works, the mayor said. He also worked as the city’s director of Homeland Security and Emergency Management Agency from 2012-2017.

According to police, an argument started around 12:30 p.m. between Geldart and trainer Dustin Woodward after the door of Geldart’s parked car hit Woodward’s car in the parking lot of a Gold’s gym.

Video shows the two shouting at one another until Geldart confronts the trainer, staring him down. Despite being much smaller in stature, Woodward sizes Geldart back up, until the massive deputy mayor appears to reach for Woodward’s throat.

Woodward pushes Geldart back, and the men resume shouting at one another as bystanders intervene as Geldart walks away and gets inside his car, according to the clip.

Woodward, who was not injured in the scuffle, told WUSA that he did not know who Geldart was when they went at it.

“What he did was wrong and shouldn’t go unpunished, especially given the position that he holds,” Woodard said. “But, we also need to show some compassion for him in this matter as well. The man has a family that he’s responsible for feeding and needs to be able to provide for. This situation puts a bit of a wrench in that.” 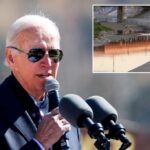