He saved a buck.

A North Carolina man was caught on camera yanking a bucket off a distressed deer’s head — and neighbors are reportedly fawning over the heroic move.

Kevin McHugh of Winston-Salem said he spotted the klutzy critter slamming into suburban houses, trees and lamp posts with an empty pail of paint stuck on its noggin.

“It was running for its life, smashing into everything in front of it and totally blind,” McHugh told NBC 12. “It was terrifying.”

But the do-gooder sprang to action,  hoofing over to the bucket-bound deer to help, he said.

Footage captured on a home security camera shows McHugh corner the small deer near a house and pull off the bucket before the animal happily darts away.

After the rescue, McHugh joked that the clumsy cervidae owes him one.

“Yeah, if the deer could ‘fawn’ over me a little longer, that would be nice,” he said with a grin. “Or at least give me some ‘doe,’ that would be great.”

The outlet didn’t report when the animal went buck wild, or how long it had been stuck.

“It was one of the dumbest things I’ve ever done,” McHugh  said, adding he put himself in some danger. “I guess it worked out in the end.”

Last winter, Long Island police made a daring rescue to save a baby deer that had fallen through an icy lake in Narrow Bay.

They wrapped the freezing animal in blankets and towels and took it to a rescue center. 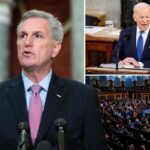 Biden to give State of the Union Feb. 7 before full House, full house 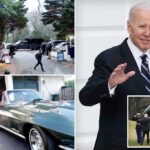 Biden back at Delaware home where documents were stashed