Kohberger, 28 and his father Michael, 67, were en route to their family home in Pennsylvania when an officer from the Hancock County Sheriff’s Office in Indiana pulled them over on Dec. 15.

The younger Kohberger, who was arrested Dec. 30 for allegedly murdering four University of Idaho students at his family’s home in Albrightsville, Pa., was behind the wheel of his white Hyundai Elantra while his dad was in the passenger seat.

The incident was the first of the duo’s two traffic stops in Indiana that happened in quick succession. Both were for driving too close to a car in front of them, but neither ended up with a ticket being issued.

“You were right up on the back end of that van. I pulled you over for tailgating,” the officer told them.

During the stop, the two told the cop about an incident that was developing in real time at Washington State University Pullman, where Bryan is a doctoral student in criminology.

Earlier that morning, a SWAT team had killed a man near the college’s campus who threatened to murder his roommates. The incident was unrelated to the University of Idaho murders.

Their discussion appeared to confuse the officer, who said he was unaware of the incident.

When the officer asked the father and son where they were headed, the younger Kohberger responded, “We’re gonna get some Thai food right now.”

His father followed up by saying, “We’re headed to Pennsylvania, the Pocono Mountains.”

“We’re slightly punchy because we’ve been driving for hours,” he added.

The cop let them go with a warning at 10:44 a.m. Just six minutes later, the two were pulled over again for following a car too closely, according to bodycam footage released by police Tuesday.

Kohberger appeared in Pennsylvania court Tuesday after waiving his right to an extradition hearing. He will soon be arraigned in Idaho court, where he will charged with four counts of first-degree murder. His extradition attorney has said he plans to plead not guilty to the charges and his family have urged the public not to pre-judge him.

Kohberger’s white Hyundai became an important detail in law enforcement’s more than six week long investigation, although it is still not exactly clear how they came to arrest him. More details on the investigation will be released following his Idaho court appearance, after which prosecutors can make his probable cause affidavit public, per local law. 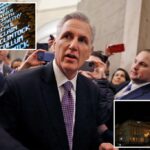 House remains without a speaker despite reconvening, adjourns until Thursday after taking pizza break 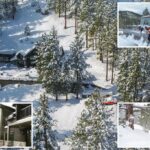