The suspect in the slaying of four University of Idaho students allegedly tried to expose himself, sang violent rap songs and threatened guards from a Pennsylvania jail cell, according to a report.

Valerie Cipollina, 50, told the outlet she witnessed Kohberger during her six-hour stay at the jail after she was arrested for domestic violence on New Year’s Day.

“You come in here and I’ll cut you. I’m going to pee on your face. Do what you want with me, I don’t give a s–t,” Cipollina claimed Kohberger yelled at one guard.

She told the Daily Mail that she was held in a cell across from the accused killer in Stroudsburg, Pennsylvania and could see his upper body through the glass.

She said she didn’t recognize him, but another inmate informed her that “that’s the guy who killed those college students.”

Cipollina — who was arrested after fighting with her boyfriend at a Pennsylvania hotel, according to the outlet — claimed that the man she believed to be Kohberger repeatedly lifted his shirt.

She said she also heard a female guard tell the inmate to put his pants back on but was unable to see his bottom half.

“I couldn’t see his genitals because the glass wall only went down so far,” she told the Daily Mail, adding that she thinks he tried to expose himself to the guard.

The Garnerville, New York woman said the man shouted violent rap lyrics with expletives in them and screamed threats at the guards.

She also said he yelled out “F–k my enemies and foes,” a line from Lil Wayne’s song “Multiple Flows.”

She said a guard told him to shut up and he replied with threats, according to the outlet.

He reportedly yelled “Come on in mother f—ker. You come in here — let’s talk,” Cipollina claimed.

“He then screamed at the top of his lungs, ‘Come in all of you. You scared of me? You should be scared of me. You’re going to do nothing to me because I’m going to cut all of you up’,” she said.

Cipollina was booked into the Monroe County Jail at 6:20 a.m. on Sunday and released at 12:11 p.m. the same day, the outlet reported.

Kohberger is being held at the same jail as he awaits extradition to Idaho where he faces four counts of murder in the stabbing deaths of Ethan Chapin, 20, Xana Kernodle, 20, Kaylee Goncalves, 21, and Madison Mogen, 21 at their Moscow, Idaho rental home on Nov. 13.

However, it’s unclear where in the jail he is being held and if it is near other inmates — including female inmates.

The Post was unable to confirm Cipollina’s account. The jail warden didn’t return a reporter’s calls and Kohberger’s extradition attorney did not respond to messages. His defense attorney couldn’t immediately be reached.

The shocking behavior is a departure from previous descriptions of the Ph.D. student at Washington State University. Past professors and classmates called him awkward and highly intelligent.

Kohberger, 28, was arrested Friday at his family home in Pennsylvania and is expected to be extradited to Idaho in the coming days.

Police have not released a motive in the killings or how he was connected to them.

However, once Kohberger appears in Idaho court, officials can legally release the probable cause affidavit used by police to authorize his arrest. The document will likely reveal details about what led to his arrest nearly seven weeks after the gruesome killings rocked the small college town.

A Monroe County public defender said Kohberger “is eager to be exonerated” of the four counts of murder. 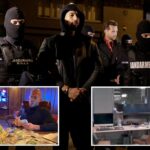 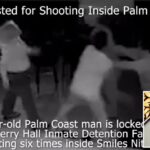