The Connecticut man who gunned down three Bristol cops after luring them with a phony 911 call was a beer-drinking divorced dad of two, who stunned neighbors described as the “rowdy one” in his clan.

Cop killer Nicholas Brutcher, 35, also liked guns — and is seen proudly displaying a handgun at a wedding in one Facebook post from 2016.

“Nick was the big rowdy one,” a neighbor of his brother Nathaniel told The Post Thursday.

“He was the big funny one, a big teddy bear. He was huge. Big guy, but sweet as pie.

“The family must be traumatized,” she added.

Bristol cops were responding to a 911 call about a domestic dispute at Nicholas Brutcher’s home — a phony call to lure cops to the house, according to authorities — and opened fire when they arrived, killing two and wounding one.

Nicholas was killed by police at the scene and younger brother Nathaniel was wounded in the Wednesday night shootout and remains hospitalized, according to police.

It is unclear if Nathaniel also shot at officers or was a bystander or a victim.

According to NBC Connecticut Nicholas had been kicked out of a bar then went home and got into an altercation with his brother.

Bristol police have yet to determine a motive for the shooting, and have released few additional details about the circumstances — calling it a “complex investigation.”

Police Sgt. Dustin Demonte, 35, and Officer Alex Hamzy, 34, were killed at the scene, and a third cop, Officer Alec Iurato, 26, was wounded and underwent surgery Thursday.

Speaking about the brothers’ reputation, the neighbor added: “Nobody’s gonna like those boys, no matter what you say about them. I’m really mad at them.”

However, the same neigbor also described how Nathaniel called her “grandma,” and recently dropped off a jar of homemade pickles — one of 53 jars he boasted to have made.

Nicholas and Nathaniel also have two brothers and an adopted sister, she added.

A different neighbor described Nathaniel as “a skater punk” and “a man-child” who lives in a trash-strewn trailer with beer cans piled up on the unkempt property.

He also believed he was into drugs, adding: “Nate is high as a kite every time I see him. But cocaine doesn’t drive you to call cops and shoot them.”

He said Nicholas would visit his brother on occasion and was “always drinking.”

“I don’t know much about [Nicholas], except he drinks a lot,” he said. “The dude’s always drinking. He’d be around, checking on his brother.

“Their mother must be a wreck right now,” he added. “She’s also crazier than a f–king bag of chips.

“Their dad’s really got his s–t together. He’s got a really good heart. He’s been taking care of their mother and those boys for years. That dude’s a strong man.

Hamzy, a Bristol native and 2006 graduate of Bristol Eastern High School, leaves behind his wife, Katie, his parents and two sisters, authorities said.

Sgt. Delmonte is survived by his pregnant wife, Laura, and daughters Phoebe and Porter

In a separate report, the Connecticut Post reported Thursday Iurato had received a commendation last year for thwarting a suicide attempt. 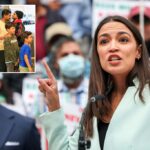