Brian Walshe, the Massachusetts dad charged in connection to his wife Ana’s disappearance, left a note addressed to his “friends” on his dining room table — in which he expressed appreciation for the “concern” and said he was focused on the search.

The photo of the handwritten note in blue ink, published by the Daily Mail and titled “Response to friends,” reads: “I appreciate your concern. Right now my focus is finding Ana and spending time with…”

The rest of the message cannot be seen but he was presumably referring to the couple’s three young boys, who were later placed in the state’s care after he was charged with impeding the police investigation.

A separate note in the rented home in Cohasett begins with “Cell” and contains a numbered list of tasks Walshe was apparently planning to accomplish, though the details are obscured.

Other images captured exclusively by The Post include an eerie note written in bright red letters by Ana Walshe, 39, looking forward to the new year shortly before she went missing.

“Wow! 2022 … What a year! And yet, we are still here and together! Let’s make 2023 the best one yet! We are the authors of our lives … courage, love, perseverance, compassion, and joy. Love, Ana,” says the message was written on the side of a Lanson Noble Cuvee champagne box.

The Post’s images also show two US passports placed side by side on the same desk near a book titled “The Obstacle.”

Also spotted in the home are three bottles of A.H. Hirsch Reserve Whiskey — which start at $3,000 a bottle, according to online searches — on the kitchen table. Next to the bottles are a pirate-themed decorated pumpkin, The Post’s photos show.

Family friend Gem Mutlu, who attended the party, has claimed that nothing seemed amiss during the festivities.

“We hugged and celebrated and we toasted, just what you do over New Year’s. “There was a lot of looking forward to the New Year. There was no indication of anything other than celebrating the New Year, problems on hold,” he told WBZ-TV.

Brian, 37, claimed his wife told him around 6 a.m. Jan. 1 that she had a “work emergency” to attend to in Washington, DC, and left for the airport – but police have said they have no record of her getting a rideshare or leaving on a plane that morning.

Police have found blood in the couple’s basement and a broken knife, according to an affidavit for Brian’s arrest.

They discovered a hatchet, a bloody rug, and cleaning supplies while searching a trash facility in Peabody, a little over an hour from the couple’s home, CBS reported.

Authorities also seized two dumpsters and a trash compactor from the condo complex where Brian’s mother lives in Swampscott, a neighbor has told The Post.

Brian, who only reported his wife missing on Jan. 4, has pleaded not guilty to a charge of hindering the police investigation and is being held on a $500,000 bond. 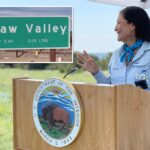 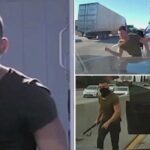