Massachusetts fraudster Brian Walshe was photographed arriving at Quincy District Court on Wednesday morning ahead of his arraignment on murder charges related to the disappearance of his wife.

Brian, 47, reported his wife Ana Walshe, 39, missing on Jan. 4 — three days after he allegedly last saw her at their Cohasset home in the early hours of New Year’s Day.

He was arrested on Jan. 8 for misleading investigators in their search.

Prosecutors announced Tuesday that they were also charging Brian with murder, as well as improper handling and transport of human remains.

Brian arrived at court Wednesday in beige pants and a gray sweater.

His hands were in handcuffs secured to a belly chain and he had shackles on his ankles.

Ahead of Wednesday’s proceedings, it is still unclear if law enforcement found Ana’s body.

The extensive search for the working mom — who shares three sons, ages 2 through 6, with Brian — turned up several grisly finds, including blood and a knife in the family’s basement and a hacksaw, hatchet and carpet at a Peabody trash transfer site. 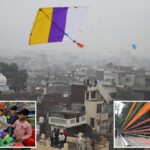 6 killed, including kids, by kite strings at India festival 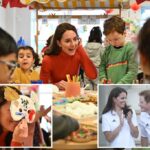