New love. Brad Pitt is “enjoying every moment” of his romance with Ines De Ramon, an insider exclusively tells In Touch.

“The conversation between them flows. They make each other laugh,” the source shares. “Brad’s in his element with Ines.”

The insider adds that Brad, 59, “is on cloud nine” as he gets to know the jewelry designer.

The Ocean’s Eleven actor first sparked romance rumors with Ines, 29, after they attended a Bono show together in Los Angeles in November. The pair was spotted cozying up to each other outside of the venue while they spent time with Cindy Crawford, the model’s husband Rande Gerber, Sean Penn and Vivi Nevo.

They continued to make public appearances together in their first month of dating, and Ines accompanied Brad to the premiere afterparty of his new movie, Babylon, in December 2022.

Shortly after their first public outing together, an insider exclusively told In Touch that the father of six is “really into” the certified nutritionist.

“There’s a lot to like,” the separate source shared in November. “She’s gorgeous, smart, funny, loves art and architecture and she isn’t intimidated by him in the least.”

The insider noted that “Brad’s number one issue when meeting girls” is that “his fame gets in the way,” though he hasn’t experienced that issue with Ines. “She isn’t shy, she’s super confident, and she goes after what she wants,” the source revealed. “She likes Brad and she didn’t make that a secret, which he found refreshing.”

While the pair met through mutual friends, the source added that she “initiated the introduction.” The insider continued, “They’re really into each other and they seem like a perfect match.”

Prior to her romance with Brad, Ines split from estranged husband Paul Wesley in September after three years of marriage. A rep ​​for the former couple confirmed their separation and revealed that Ines and Paul, 40, had been living separately before announcing the breakup.

“The decision to separate is mutual and occurred five months ago. They request privacy at this time,” the rep told People at the time.

Meanwhile, the Once Upon a Time In Hollywood actor has been romantically involved with several women following his split from ex-wife Angelina Jolie in September 2016.

After tying the knot in 2014, Angelina, 47, filed for divorce from Brad after a decade as a couple. Both Mr. & Mrs. Smith stars were declared single by April 2019. However, they are still in the middle of a messy legal battle over custody of their children and assets.

Brad and Angela share kids Maddox, Pax, Zahara, Shiloh and twins Knox and Vivienne. He is currently fighting for joint custody of their children that are minors, though Maddox, 21, and Pax, 19, are both legal adults and can choose how often they see each parent.

It’s not clear how serious Brad and Ines’ romance is, though an insider previously told In Touch in July that the Oklahoma native is ​​“strictly dating for fun.”

“Brad has been keeping a low profile lately,” the source shared. “He did a lot of internal work after splitting with Angelina, and he is pretty focused on work and other new ventures right now. He loves design and architecture and real estate and is immersing himself in things that make him feel happy and fulfilled.”

The insider added, “Brad decided that he is not interested in a committed relationship at the moment. He doesn’t want to step out at hot spots and get photographed. He is tired of being judged for every move he makes.” 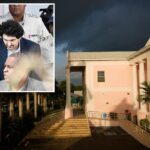 You’re Way Too Comfortable For Success