Shocking new allegations have been made against Brad Pitt in a countersuit by ex-wife Angelina Jolie, in paperwork obtained by In Touch on Tuesday, October 4. The Bullet Train actor allegedly “choked one of the children and struck another in the face” and “grabbed Jolie by the head and shook her” during the family’s private flight from Paris to Los Angeles in September 2016 that resulted in the Oscar-winning actress filing for divorce.

The filing went on to state that at one point, Pitt “poured beer on Jolie; at another, he poured beer and red wine on the children.” The new paperwork with the claims stems from an ongoing legal battle over the French winery at Chateau Miraval, which the pair once jointly owned.

The former couple, who married in August 2014 after nine years together, were flying back to the United States with their six children when some type of altercation allegedly occurred aboard the aircraft. A federal investigation by the FBI was launched into the incident, but no criminal charges were brought forward in the case, which wrapped up in November 2016.

The Los Angeles Department of Child and Family Services also investigated a tip that Pitt became “verbally abusive” and “physical” with one of the children — which the actor denied — and closed their case without bringing forth any charges.

Following the flight, Jolie filed for divorce and sought sole custody of the pair’s six children, who were all minors at the time of the incident: Maddox (now 21), Pax (now 18), Zahara (now 17), Shiloh (now 16), and twins Knox and Vivienne (now 14). Her request was granted, and Pitt initially had supervised visitation with his children, later followed by “therapeutic visits” as their custody battle continued before a judge allowed Pitt more time alone with his children.

The Once Upon a Time in Hollywood star confessed in a June 2022 interview with GQ that he had quit drinking six years prior and attended AA for over a year. “I don’t have that ability to do just one or two a day,” he revealed referring to alcoholic beverages, adding, “It’s not in my makeup. I’m all in. And I’m going to drive into the ground. I’ve lost my privileges.”

The FBI’s highly redacted report into the aircraft incident was released in August 2022 following Angelina’s request under the Freedom of Information Act request that the documents be made public. The Wanted star, referred to as “Jane Doe,” said that Pitt’s actions made her feel “like a hostage” on the plane. She alleged that he “grabbed her by her head,” shook her and pushed her into the wall of the aircraft.

The actress continued that Pitt was “becoming a monster” as he “ranted” on the flight at herself and the children as he “mimicked the behavior of a monster and screamed at them.” Jolie said the trauma left her and their kids “shell-shocked.” No charges were ever filed against Pitt stemming from the FBI’s investigation.

Reps for Jolie and Pitt did not immediately respond to In Touch’s requests for comment. 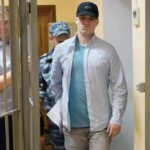 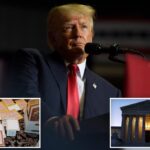