A bronze sculpture honoring Martin Luther King Jr. and his wife Coretta Scott King that was unveiled in Boston this week is already getting ripped by online critics.

The piece, titled “The Embrace,” was crafted by the conceptual artist Hank Willis Thomas, TMZ reported. It depicts a famous hug that the iconic civil rights leaders gave each other after King received the Nobel Peace Prize in 1964, which was memorialized in an iconic photo.

The piece has received some praise since its crowded unveiling in the Boston Common on Friday, with members of the King family in attendance.

Many others, however, especially those online, didn’t wait long to bash the artwork as a poorly designed eyesore.

“Naaahhhh they gotta be a trolling,” one user tweeted with a series of crying emojis.

“This is awful,” the British rapper and podcaster Zuby added.

Several users questioned the artist’s decision to only feature the couple’s arms and not include the couple’s heads. Others remarked that, when viewed from various angles, the piece came across as pornographic, according to one user. 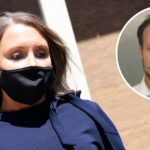 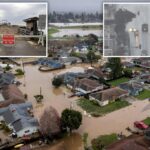 Dry days ahead for California after torrential downpours