There was something scary inside this pumpkin for the Halloween season.

Border patrol officers found $402,196 in liquid meth hidden in pumpkins at the Eagle Pass Port of Entry Tuesday, according to US Customs and Border Protection.

The CBP’s Eagle Pass field office said authorities discovered about 44 pounds of the alleged meth stuffed inside 136 condoms that were placed in four pumpkins during the examination of a 2012 Ford Escape.

The vehicle was attempting to cross into Texas from Mexico at the Eagle Pass Camino Real International Bridge when officers referred the vehicle for further inspection.

“Our frontline CBP officers have seen just about everything and this Tuesday was no exception as they encountered liquid methamphetamine hidden within pumpkins,” said Acting Eagle Pass Port Director Elizabeth Garduno.

“They utilized their training, experience, interviewing skills and uncovered a rather novel narcotics smuggling method in the process.”

The feds seized the narcotics and turned over the driver and the passenger in the Ford Escape to the Maverick County Sheriff’s Office to probe the case.

The sheriff’s office could not be reached for comment Thursday night. 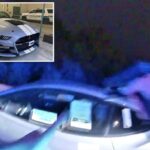 14-year-old runs out of gas in allegedly stolen Mustang during police chase, jumps off bridge