Graphic images appear to show families in China burning the bodies of their loved ones in the streets — a horrifying consequence of the country’s current surge in COVID cases.

In one clip, a wooden casket can be seen burning in a seemingly rural part of the country.

Another video, believed to be filmed in Shanghai, shows a group of people gathered around a makeshift pyre that has been set aflame.

One funeral home is so overwhelmed that it can only permit families five to 10 minutes to mourn their loved one, Bloomberg reported. So many people are dying in Shanghai that Longhua Funeral Home is handling five times more corpses than usual each day.

“The whole system is paralyzed right now,” an employee at Longhua told Bloomberg.

Between the overwhelming demand for cremations, and funeral homes reportedly raising the cost for the service amid high demand, many people have resorted to cremating their loved ones themselves.

“I’ve tried multiple paths to cremate my father but none have worked,” a Shanghai resident said in her neighborhood group chat on Dec. 28, according to screenshots shared online and reported in Bloomberg.

The post continued: “The funeral services hotline told me that all cremation slots are full until after the new year. Since national law doesn’t allow patients who die of infectious diseases to be stored at home, I shall find an empty patch in our neighborhood to cremate my father. If you have problems with this, please call the police.”

Relatives waiting outside Yinheyuan Funeral Home in Guangzhou last Thursday told Radio Free Asia that they had to leave their deceased family member’s body at home to stand in line — because the funeral home was not reachable by phone.

Other footage from Babaoshan Funeral Home in Beijing shows lines of cars marked “Jing Funeral” waiting outside an entrance.

The funeral parlor has been forced to carry out cremations 24 hours a day to keep up with a rise in demand, Radio Free Asia reported.

The total number of COVID deaths since December remains somewhat of a mystery, as officials have only acknowledged a handful of deaths since President Xi Jinping’s administration abruptly reversed its zero-COVID policy.

The London-based science data company Airfinity estimates China is experiencing over 2 million COVID cases each day, and about 14,700 deaths per day.

The country’s official death toll for the entire pandemic stood at 5,241 fatalities on Dec. 24, 2022, when the count was last updated. 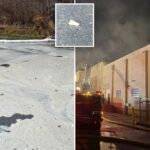 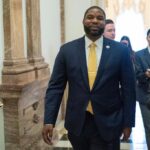 Rep. Byron Donalds says next House speaker ‘may or may not be me’ after getting 20 votes