The controversial Marxist co-founder of Black Lives Matter recently completed tens of thousands of dollars in renovations at her posh Los Angeles home, including building a new plunge pool and backyard sauna, according to a new report.

The images reveal a deep plunge pool that has yet to have water added, as well as a small shed that houses the sauna. A child’s swing set and covered slide is also visible in the photograph.

Cullors, who resigned from the national group a month after The Post revealed that she had gone on a real estate buying spree last year, paid $1.4 million for the Topanga Canyon home in March 2021, according to public records.

At the time of her May 2021 resignation, Cullors insisted her “retirement” from the group that she had led for six years had been in the works, and was not tied to the controversy surrounding the shopping spree in which she amassed four properties for more than $3.2 million amid the group’s troubled finances.

Among the properties was a sprawling home attached to an airplane hangar and runway in an Atlanta suburb that she has since sold, according to public records.

Cullors also used donations to pay a company owned by her baby daddy, Damon Turner, $969,459 for “live production, design and media,” according to the group’s latest filings with the IRS.

Cullors chalked up the reports on her properties and spending as “right-wing bullying” and said that she had paid for her holdings with money she made from book and speaking deals.

Last year, BLMGNF said it took in more than $90 million following the May 2020 murder of George Floyd, a black man whose death under the knee of a white Minneapolis police officer led to protests around the world.

Cullors, who bought the Topanga Canyon property under her company Abolitionist Entertainment LLC, paid for the house in cash, according to a celebrity real estate blog.

The backyard renovations are in addition to a $35,000 fence that Cullors installed around the property last year.

After Cullors resigned from BLMGNF, the group continued to be mired by financial controversies.

Last month, the non-profit’s new leader was accused of siphoning more than $10 million in fees from donors to pay his consulting firm, according to a lawsuit.

But the BLM leader, Shalomyah Bowers, told The Post last month the case against him is nothing more than a power grab by disgruntled activists trying to wrest control of the movement.

Cullors didn’t return requests for comment Saturday. Bowers refused comment, adding that the renovations were not related to BLMGNF. 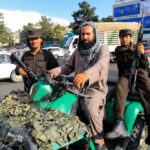 Does Christine Brown Have a New Boyfriend?