WASHINGTON — Members of the White House press corps are pushing President Biden to stick to tradition and hold a news conference after Tuesday’s midterm elections — but press secretary Karine Jean-Pierre again refused Monday to say whether the president would host one.

Jacqui Heinrich of Fox News, the White House Correspondents’ Association’s newest board member, pressed Jean-Pierre for a commitment at her regular briefing Monday — after WHCA President Tamara Keith of National Public Radio did so last week.

“An outside observer might conclude that he doesn’t want a press conference because he’s poised to lose control of one or both chambers [of Congress],” Heinrich said. “So why, the day before the midterms, won’t the White House commit to holding that traditional post-midterms press conference the day after the election?”

The Fox reporter added a mere “statement or remarks” would be “not just a departure from the traditions that the president has promised to restore to the White House, but it also doesn’t allow the sort of nuanced discussion about what signals voters are sending in the midterms or how he plans to engage with the new Congress.”

Jean-Pierre replied that “it takes some time in any administration to lay out what the schedule is going to be” — before saying that Biden would make some kind of public statement, but declining to say whether it would be a formal news conference of the kind he last held in January.

“I have been very clear, you’re gonna hear from the president. He always enjoys taking your questions. So, you know, he will — I’m sure he’ll take your questions as well. I’m just not going to get ahead of it,” Jean-Pierre replied.

“I’m just not going to lay out what what his day is going to specifically look like on Wednesday. But again, he’s going to address the American people and I think that matters. He’s going to be clear about what’s on his mind, and I’m just not gonna get ahead of it from here.”

It would be unusual for Biden to forgo a press conference immediately after the midterms.

“A formal press conference allows for a more in-depth exploration of the president’s views,” Keith told The Post in an email.

“It better helps the American people understand where the president is coming from than a statement alone or even answering a few questions,” she said. “President Biden’s recent predecessors have answered questions on the day after voting for anywhere from 45 minutes to an hour and a half, giving the public insight into how they interpreted the election results and importantly how they planned to govern in the months ahead.”

Ari Fleischer, George W. Bush’s first press secretary from 2001 to 2003, said that holding a press conference is particularly necessary for Biden amid questions about his mental acuity and his political future as he prepares to celebrate his 80th birthday on Nov. 20.

“I think it’s particularly important for Joe Biden, given the questions that will arise about whether he’ll run for re-election,” Fleischer said. “This is such a tradition. Presidents — win or lose — do it. If he doesn’t, it will be a glaring deviation from the norm and people will wonder if he’s able to hold one.”

Fleischer added that if Biden does host a press conference, he would watch to see how the president explains the election results.

“If his party loses the way it’s projected, what’s his explanation? Is it ‘Mega MAGA’s’ fault? Is it a recognition that the Democrats are running too far to the left? Does it signal a change in how he governs?” Fleischer said.

“In the era of divided government, it really is up to the president to decide if anything gets done, even more so than the Congress. Presidents can decide ‘pass whatever you want and I’ll veto it — we’ll fight,’ or presidents can do what Bill Clinton did when he lost the House and Senate in 1994 and work from the center.”

Data compiled by political scientist Martha Kumar, director of the White House Transition Project, indicate that Biden is lagging behind his recent predecessors in press conferences.

Biden has given 17 press conferences since taking office — most of them during overseas trips, though some were with visiting foreign leaders at the White House where it’s traditional for the US president to call on just two American reporters.

In the past century, just two presidents averaged fewer press conferences per month than Biden — Richard Nixon, who averaged just 0.6 per month when he resigned in August 1974 due to the Watergate scandal, and Ronald Reagan, at 0.5 per month. Kumar noted that Reagan’s tally included few foreign events and more evening East Room forums with major news networks.

Presidents who served when radio was more common than TV actually gave more press conferences. Franklin D. Roosevelt gave more than 1,000 press conferences over his 12 years as president and averaged 7 per month, while Calvin Coolidge’s more than 500 was good for an average of 7.8 per month over his two terms in office.

Brian Karem, a veteran White House reporter who writes for Salon and other outlets, said Biden should hold a news conference “no matter what the outcome” of the election and that “it should be an open press conference where every member of the press who holds a White House Press pass can attend.”

Karem, who has helped rally reporters against the Biden press office’s mysterious prescreening process for large indoor presidential events, said that the give-and-take of a press conference is important for the public.

“There is no reason on God’s green earth why the current president of the United States cannot hold a press conference in the White House before an open press and answer questions about the direction this country is going in because of his leadership and as a result of the midterm elections,” Karem said. “The electorate deserves answers. And we have many questions. They should all be addressed.” 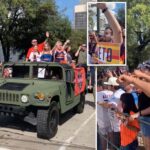