Social media users roasted Joe Biden over “creepy” selfies with kids where the president is seen lurking in the background of children’s selfies with his face up against a window.

Biden gave kids sitting in the Lemon Press Juice Shop on Nantucket an up-close and personal look when he approached the store window and smiled for some photos, a social media post from the Nantucket Current shows.

The president, who is on Nantucket with his family for Thanksgiving, was shopping along the strip for Small Business Saturday when he stopped to meet his little fans.

“There’s Joe! Oh my God, hi!” one of the children can be heard screaming as the president gingerly walks down Main Street sipping his drink through a straw.

Biden stops dead in his tracks upon hearing their excited cries and instantly walks toward the window and waves.

Biden does a semi-squat at the window and bows his head to take his sunglasses off before slowly lifting it toward the kids, exposing his pearly whites.

Some social media users lambasted the close encounter with the president as “creepy.”

‘This is not normal. Stop trying to normalize this. If it was any other old man, you would all be freaking out, too,” one Instagram user wrote.

“They used to call that a peeping Tom in my day!” wrote another.

DC Patriot journalist Mindy Robinson said, “It’s like a horror movie, someone save the kids.”

Others found the interaction to be cute and heartwarming.

“Love this! All of this,” a Twitter user said. “This is called leadership. The babies are so excited, cute, and happy.”

“Awwwww so thrilling to see kids excited about the president!” another wrote.

“The President who stops just to give some kids a smile that is what is Real President does. Thank you President Joe,” said another. 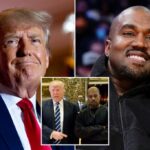 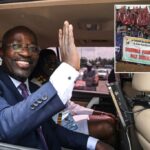