President Biden on Monday told a boy that he could “go steal a pumpkin” to avoid his “boring” speech about Thanksgiving to Marine Corps members in North Carolina.

Biden, 80, made the surprising stab at humor when he approached the eldest of four children whose Marine Corps mother had just introduced the president.

The well-behaved boy had been minding two of his three younger siblings as his mother spoke and his father held the family’s squirming infant.

The boy chose instead to listen politely to the president.

There were pumpkins decorating the Marine Corps Air Station in Cherry Point, NC, and Biden’s attempts at humor continued — on the heels of his morning turkey pardon — as he told the troops that “the reason we came is the chef’s not bad.”

Biden more seriously recounted to the soldiers his family’s experience with his late son Beau Biden working overseas in the military and praised the families of troops who have to endure their absence.

After wrapping up, the president snapped a cellphone selfie with the family and whispered something into the baby’s ear — before donning an apron and scooping mashed potatoes as first lady Jill Biden handled stuffing for an assembly-line buffet.

The president was then swiftly handed a bowl of what appeared to be ice cream before he and the first lady greeted troops, including sitting for conversation and posing for photos. 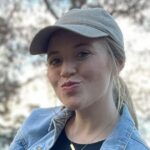 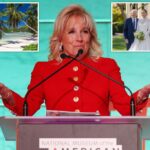