President Biden raised doubts this week about Russian leader Vladimir Putin’s claim that he never intended to use nuclear weapons.

“If he has no intention, why does he keep talking about it?” Biden said during an interview with NewsNation Thursday. “Why does he talk about the ability to use a tactical nuclear weapon?”

The president described Russia’s leader as “very dangerous” in his approach to nuclear weapons.

“He can end this all, get out of Ukraine,” Biden added.

The US president expressed skepticism about Putin’s intentions just hours after the Kremlin strongman said at a conference of international foreign policy experts that it was unnecessary for Russia to strike Ukraine with atomic weapons.

“We see no need for that,” Putin said. “There is no point in that, neither political, nor military.”

Putin argued that an earlier warning of his readiness to use “all means available to protect Russia” didn’t amount to a nuclear threat but was merely a response to statements made by Western leaders about their possible use.

“What were we supposed to think?” Putin said. “We saw that as a coordinated position, an attempt to blackmail us.”

Putin and his cronies have repeatedly said in recent weeks that Russia could use nuclear weapons to protect its territorial integrity — remarks interpreted in the West as implicit threats to use them to defend the four regions of Ukraine that Russia claims to have annexed.

Biden and other top US officials have warned Russia that if it were to deploy any type of nuclear weapon, the consequences would be catastrophic.

In an interview earlier on CNN, White House national security spokesperson John Kirby said it was possible Russia was considering the use of a “dirty bomb” and was setting up a pretext to blame Ukraine. But he said the US still had not seen any signs that indicated that was necessarily the case.

Putin and other top officials have been calling Western leaders accusing Ukraine of planning a “false flag” attack involving a “dirty bomb” — an allegation Kyiv and its allies have denied.

“They often blame others for that which they are doing themselves or about to do. So that’s why we have to take that seriously,” Kirby said of Putin’s allegations.

“I’ll also tell you that we’re not seeing any signs, even today, that the Russians are planning to use a dirty bomb or to even make preparations for that.” 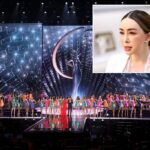 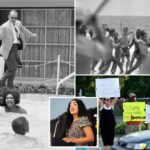 John Fetterman’s wife Gisele claims swimming in US is ‘racist’