An optimistic President Biden on Friday predicted that Democrats would maintain control of the Senate and “have a chance to win” the House of Representatives — even as polls show surging GOP momentum ahead of Election Day.

“We’re going to win this time around, I think. I feel really good about our chances,” Biden said before boarding Air Force One following a rambling speech in San Diego.

“I haven’t been in all the House races, but I think we’re going to keep the Senate and pick up a seat. I think we have a chance to win in the House,” said the president, who was bound for a political fundraiser in Chicago.

The survey has captured Democrats’ downward spiral since August — when the party held a lead of 6 points in the generic congressional ballot. By late September, the same poll saw Democrats slip to 4 points, and with the Nov. 8 midterms around the corner, their lead was down to 2 points.

Most voters have cited inflation as the most important issue facing the country.

Politico reported in its most recently updated 2022 Election Forecast that the race for control of the Senate remains a “toss up,” while the midterm elections have slid in towards “likely Republican.”

So far, over 34 million in 47 states have cast their votes, according to data from election officials, Edison Research and Catalist, CNN reported.

Currently in Washington there are 50 Republicans, 48 Democrats and two Independents who caucus with Democrats in the split Senate. There are 220 Democrats and 212 Republicans in the House with three vacancies. 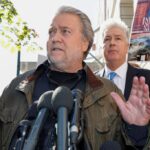 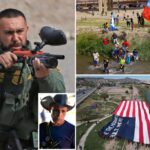 Migrants who rushed Texas border were led by US artist