SYRACUSE — President Biden traveled upstate Thursday in a last-minute bid to boost the struggling campaigns of Gov. Kathy Hochul and other New York Democrats — by accusing Republicans of “hoping for a recession” and botching key stats about the economy.

Normally among the bluest of deep-blue states, New York could elect a GOP chief executive for the first time in 20 years Nov. 8 in the form of Long Island Rep. Lee Zeldin.

The RealClearPolitics average of recent polls showing Hochul beating Zeldin by just 6.1%, despite Biden carrying the Empire State by more than 23 percentage points two years ago.

Hochul isn’t the only Dem with a fight on her hands, however. Polls also show a tight race between Rep. Sean Patrick Maloney (D-Hudson Valley), chairman of the Democratic Congressional Campaign Committee, and his Republican challenger, Assemblyman Michael Lawler.

Hochul showed no outward signs of worry when she and Biden shared a warm embrace after the president walked down the steps of Air Force One at Syracuse Hancock International Airport.

Biden was greeted nearby by protesters as he arrived at the community college. One group held a large banner that read, ‘[first son] Hunter Biden is the most privileged and protected person in America.”

Hours earlier, the Bureau of Economic Analysis said the US economy grew at an annual rate of 2.6% from July through September — after falling 1.6% and .6% in the first two quarters of the year, respectively.

The GDP data indicate that the US economy is not in a recession, which is commonly defined as two quarters of consecutive contraction, though economists still fear a recession next year as the Federal Reserve hikes interest rates to tame in inflation, which remained at 8.2% in September, far greater than the central bank’s 2% target.

The data followed two quarters of US economic contraction and was a glimmer of good news for Biden as financial concerns including the worst inflation since 1981 and soaring interest rates drag on Democrats. Poll respondents give Biden poor marks on the economy, giving an advantage to Republicans.

“Even though my Republican friends in Congress seem to be hoping for a recession — many of them, present company excluded — today the GDP results came out and the economy in fact is growing,” Biden said in his remarks at Onondaga Community College, referring to retiring GOP Rep. John Katko, who was in attendance.

“In fact, the economy grew at a 2.6% rate last quarter, and although it may not feel like it for everyone, people’s incomes went up last quarter more than inflation went up,” he added. In fact, the Bureau of Labor Statistics found that real average hourly earnings decreased 2.5% between September 2021 and September 2022.

Biden also misled his audience when it came to prices at the pump, saying: “The most common price of gas in America is $3.39, down from over $5 when I took office.” The price of gas actually was about $2.39 when he took office before soaring to all-time highs of more than $5 in June.

When her turn came to speak, Hochul took a victory lap for the Micron investment, crediting her own leadership with securing the deal.

“I happen to be the first upstate governor in 100 years … So when I saw an opportunity with Micron knocking on the door saying, ‘What can you offer?’ I said, ‘We’re not losing this one. This is just too big’,” Hochul said. “I knew we couldn’t let this one go and we worked hard.”

Micron is set to receive at least $5.5 billion in state tax incentives over two decades.

By contrast, the so-called HQ2 that Amazon proposed for Queens in 2018 — but was later killed following protests from local politicians and residents — was set to receive roughly $3 billion in tax credits and state construction subsidies in exchange for what Amazon said would be 25,000 jobs, nearly three times more than the Micron plant.

Biden also noted proudly that only companies with unionized employees would be able to bid on the Micron factory construction, ruling out approximately 70% of state construction workers from the project, according to the Empire Center for Public Policy.

Republican candidates responded to Biden’s visit with indifference or mockery.

“If she [Hochul] wants to do three more events with Joe Biden between now and November 8, I could honestly care less,” Zeldin told reporters, adding that he doesn’t plan to renegotiate the Micron deal if he wins the governorship.

New York Republican Party chairman Nick Langworthy, who is also a candidate in the far-western 23rd Congressional District, added: “I’d be begging Joe Biden not to come anywhere near me or my district. But as Kathy Hochul said herself, she’s a proud Joe Biden Democrat.”

“It’s actually something I wholeheartedly agree with her,” Langworthy joked. “They’re both incompetent. They both are responsible for our economic crisis, our crime crisis and our culture of pay to play corruption.”

Hochul tried to return fire on her opponent, telling The Post after the Syracuse rally: “The people of New York are glad that Kathy Hochul is governor and the people of Texas wish Lee Zeldin were there because these jobs would be in Texas.” 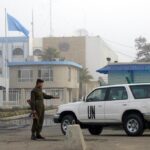 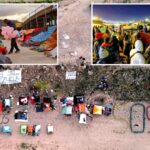 Migrants rejected from the US erect huge tent city on border