“The United Kingdom … just today, we’ve got news that Rishi Sunak is now the prime minister,” Biden said to cheers.

“As my brother would say, ‘Go figure’ — and the Conservative Party,” Biden added.

“He is expected to become the prime minister, I think, tomorrow when he goes to see the King. Pretty astounding. A groundbreaking milestone and it matters, it matters.”

The impromptu remarks were Biden’s first public comments on the rise of Sunak, who will be the third British head of government this year after Boris Johnson and Liz Truss — who resigned last week after just 44 days in office.

In addition to producing Sunak, the first Hindu and non-white prime minister, the Conservative Party produced all three of the UK’s female prime ministers (Margaret Thatcher, Theresa May and Truss). By contrast, prime ministers from the Labour and Liberal parties have all been white men.

Sunak, 42, is a former chancellor of the exchequer, a position roughly equivalent to US treasury secretary. His wife, Akshata Murty, is the daughter of Indian billionaire N. R. Narayana Murthy, who co-founded the Infosys outsourcing giant.

During the event, Harris recalled her own visits to India as a child. 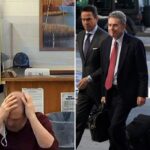 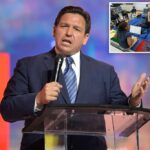