WASHINGTON — The Secret Service says it checked again and still can’t find any records that identify visitors to President Biden’s Delaware residences — where he has spent roughly one-fourth of his presidency — outraging Republicans and prompting one congressman to say “the stonewalling and gaslighting must stop.”

The agency made the baffling claim in its denial of a Freedom of Information Act appeal from The Post.

The Post is evaluating legal options to acquire records of who visited the president during the nearly 200 days he was at his Wilmington and Rehoboth Beach homes.

Transparency advocates of varying political stripes have fought in court for decades to identify presidential influencers, saying it’s important for the public to know who shapes government policy.

Biden’s detractors, meanwhile, note that he made a habit of meeting with his family’s influence-seeking international business partners before he took office and question whether that remains the case.

Congressional Republicans are vowing to aggressively pursue transparency, including with regard to Biden’s link to his family’s consulting businesses, if they retake control of one or both chambers in the November midterm elections.

Rep. James Comer (R-Ky.), who is poised to lead the House oversight committee next year if Republicans retake the House, said the Secret Service should hand over records of the president’s guests.

“The claim that there are no visitor logs for President Biden’s Delaware residence is a bunch of malarky,” Comer told The Post.

“Americans deserve to know who President Biden is meeting with, especially since we know that he routinely met with [first son] Hunter’s business associates during his time as vice president,” Comer said.

“The Biden administration must provide transparency to the American people.”

Rep. Guy Reschenthaler (R-Pa.), an increasingly prominent House Republican who hosted the caucus’s recent “Commitment to America” campaign launch in his western Pennsylvania district, also called for visitor log transparency and vowed to get to the bottom of the president’s role in his family’s businesses.

“I am deeply concerned by this blatant conflict of interest and its massive national security implications.”

“It is absolutely crucial that visitor log records for Biden’s homes in Delaware, where he spends a quarter of his time, be released to the public,” the congressman added.

“This administration’s stonewalling and gaslighting must stop. Next year, House Republicans will conduct a fair and transparent investigation into the Biden family’s influence peddling and deliver the American people the answers they deserve.”

The conservative transparency group Judicial Watch, meanwhile, has accused the Secret Service of playing a “shell game” with visitor logs by presumably possessing relevant information but claiming not to have it because they consider it to belong to the White House, which is generally exempt from FOIA.

“If the Secret Service is doing its job, there has to be visitor records,” said Tom Fitton, president of Judicial Watch. “If there aren’t any records, the scandal is much bigger than just a lack of transparency.”

Biden took office last year vowing to uphold “the highest standards of transparency” and the White House congratulated itself shortly after he took office for resuming the partial release of West Wing visitor logs, which then-President Donald Trump discontinued in 2017.

Biden’s press office said in a release, “These logs give the public a look into the visitors entering and exiting the White House campus for appointments, tours, and official business — making good on President Biden’s commitment to restore integrity, transparency, and trust in government.”

But the White House has firmly refused to release similar records from Biden’s Delaware residences, saying that doing so would amount to an unnecessary intrusion into the president’s private life.

“I can confirm we are not going to be providing information about the comings and goings of the president’s grandchildren or people visiting him in Delaware,” Psaki said last August.

“The president goes to Delaware because it’s his home. It’s also where his son and his former wife are buried. And it’s a place that is obviously close to his heart,” Psaki said in January.

“A lot of presidents go visit their home when they are president. We also have gone a step further than the prior administration and many administrations in releasing visitor logs of people who visit the White House and will continue to do that.”

Presidents can pick and choose what they reveal about White House visitor logs thanks to a 2013 DC Circuit appeals court ruling written by then-judge Merrick Garland, who now serves as Biden’s attorney general. Garland wrote for a three-judge panel that the president’s constitutional right to confidential communications means that FOIA doesn’t apply to visitor logs kept by the Secret Service — even though they otherwise would seem to meet the definition of “agency records.”

Garland’s ruling on White House visitor logs, however, has not been ratified by the Supreme Court, meaning that federal courts outside of DC are able to rule differently.

In a win for transparency advocates, the liberal group Citizens for Responsibility and Ethics in Washington (CREW) successfully sued to obtain records pertaining to a Japanese delegation visit in 2017 to then-President Trump’s Mar-a-Lago resort in Florida, ultimately acquiring a list with 22 names.

“While we won access to those records, we never got much, as the Secret Service came out and said they were not vetting the president’s meetings, the Trump Organization was,” CREW spokesperson Jordan Libowitz told The Post in April, when the Secret Service first claimed to have no Delaware logs.

“I have not seen any reporting that there is a ton of official business and outside meetings being done when Biden goes to his personal residence in Delaware for the weekend, mainly just going to church,” Libowitz said. “If he were meeting with foreign heads of state at his house in Delaware, that would obviously be a different matter, though.”

Most of Biden’s activities in Delaware are unknown to the public, though he does sometimes use his Wilmington home for official work — such as when he hosted Senate Majority Leader Chuck Schumer (D-NY) and Sen. Joe Manchin (D-WVa.) last year to talk about environmental spending.

In January, Biden said that a family friend told him in his Wilmington sun room about rising meat prices amid four-decade-high inflation.

Although the White House says Biden stands by his 2019 claim that he’d “never spoken” with his son Hunter about “his overseas business dealings,” there’s a growing list of evidence to the contrary as federal prosecutors weigh tax fraud, money laundering and unregistered foreign lobbying charges against the first son, who recently paid the IRS about $2 million in back taxes.

While vice president, Joe Biden attended with his son a 2015 DC dinner whose guest list included Russian billionaire Yelena Baturina and her husband, former Moscow mayor Yury Luzhkov, according to records from a laptop that formerly belonged to Hunter Biden.

Baturina, one of a dwindling number of Russian oligarchs yet to face US sanctions over Russia’s seven-month-old invasion of Ukraine, paid $3.5 million in 2014 to a Hunter Biden-linked firm, according to a 2020 report from GOP-led Senate committees.

At the same 2015 dinner, a document indicates Joe Biden met with an executive from the Ukrainian gas company Burisma, which paid Hunter Biden up to $1 million per year to serve on its board despite no relevant industry experience as his VP father led the Obama administration’s Ukraine policy.

A photo apparently taken at the dinner venue shows Joe Biden and his son with a trio of the then-second son’s Kazakhstani business partners.

In a different business entanglement, the first son apparently still owns a 10% stake in the Chinese investment fund BHR Partners, which is controlled in part by Chinese state-owned entities. Hunter Biden cofounded BHR in 2013 about two weeks after flying with his father to Beijing aboard Air Force Two for an official trip, during which Hunter introduced his dad to BHR CEO Jonathan Li in the lobby of a hotel in China’s capital. Joe Biden later wrote college recommendation letters for Li’s son and daughter.

Hunter Biden’s attorney Chris Clark claimed less than a week after his father’s November 2021 virtual summit with Chinese President Xi Jinping that Hunter divested his 10% stake in BHR. But Hunter Biden and the White House provided no further details and online records indicate that Hunter Biden still owns the stake in the firm, which notably facilitated the 2016 sale for $3.8 billion of a Congolese cobalt mine — essential for making electric car batteries — from a US company to a Chinese one.

In a different Chinese deal, government-linked energy company CEFC paid first son Hunter Biden and first brother Jim Biden $4.8 million in 2017 and 2018, according to the Washington Post. Former Hunter Biden business partner Tony Bobulinski alleged one month before the 2020 election that Joe Biden was directly involved with the CEFC deal before launching his presidential campaign.

Bobulinski said that he spoke with the future president in May 2017 about the project and that Joe Biden was the “big guy” described in an email the same month as due a 10% stake in the initiative. A different business associate, James Gilliar, also identified Joe Biden as the “big guy.”

Emails show that in September 2017, Hunter Biden asked for a new sign and more keys to an office he was renting in DC’s House of Sweden office building. The sign was to say, “The Biden Foundation and Hudson West (CEFC-US)” and the keys were for his father, Jill and Jim Biden, and a Chinese executive named Gongwen Dong. A spokeswoman for the agency that oversees the property said, however, that the sign was not changed and the keys weren’t picked up.

Republicans have blasted President Biden for not taking a tougher stance toward China on a variety of issues, including on trade as Biden openly considers rolling back Trump-era tariffs and on Chinese exports of fentanyl, which drove a record 107,000  US drug overdose deaths last year. Biden also rarely mentions an interest in determining the origins of COVID-19, which killed more than 1 million Americans after possibly leaking from a Chinese lab.

In various other instances Joe Biden appeared to be involved with his family’s business pursuits.

Photos and emails from Hunter Biden’s laptop indicate that Joe Biden in 2015 hosted his son and a group of Mexican business associates at the vice president’s official residence. The elder Biden posed for a photo with Hunter and a group that included Mexican billionaires Carlos Slim and Miguel Alemán Velasco.

Since his father became president, Hunter Biden launched an art career seeking as much as $500,000 for his novice works.

The White House developed a plan for those sales to be “anonymous” to prevent possible influence-peddling, but ethics experts say that the arrangement actually creates greater corruption concerns. Hunter received at least $375,000 last year for five prints at a Hollywood art show attended by one of his father’s ambassador nominees, Los Angeles Mayor Eric Garcetti. It’s unclear how many additional sales he may have made. 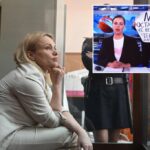 Russian journalist Marina Ovsyannikova confirms she has gone on the run 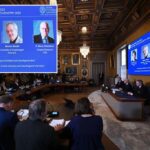