President Biden on Monday called Vice President Kamala Harris a “great president” while wishing her a happy birthday in his latest verbal slip-up.

The gaffe came during an event at the White House celebrating Diwali, an important Hindu holiday, during which the president also recognized Harris’s recent birthday on Oct. 20.

RNC Research, a Twitter account managed by the Republican National Committee, also seized on the slip, sharing a video of the moment that went viral.

Biden also attempted to flatter Harris during the event, jokingly saying that the 58-year-old vice president had just “turned 30.”

The 79-year-old president is no stranger to verbal blunders.

During a White House event taped last week, Biden falsely claimed that his student loan forgiveness plan was “passed” by Congress, when it was never up for a vote.

Biden was also mocked earlier this month for spelling out “dot” in a website address that he read off a teleprompter.

“If you get any questionable calls, please tell us by going to report fraud … report fraud, D-O-T, F-T-C, dot gov,” Biden said, attempting to direct the public to reportfraud.ftc.gov.

Biden also incorrectly stated this month that his son Beau “lost his life in Iraq” when he actually died of cancer in Maryland, and that he visited the Rio Grande to see the need for land preservation, possibly confusing it with the Grand Canyon. 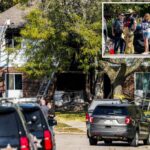