President Biden asked for the late Rep. Jackie Walorski to identify herself at a Washington event Wednesday, forgetting that the Indiana Republican died in a car crash last month.

Biden made the embarrassing error while thanking bipartisan members of Congress at a nutrition event near the White House.

“I want to thank all of you here, including bipartisan elected officials like Representative [Jim} McGovern, Senator [Mike] Braun, Senator [Cory] Booker, Representative Jackie — are you here? Where’s Jackie? — I think she was going to be here,” the president said.

Biden, 79, is the oldest-ever president and his mental acuity is regularly questioned by his political foes.

The White House released a statement from the president mourning Walorski on Aug. 3 after she perished in an Indiana wreck alongside her press secretary Emma Thomson and St. Joseph County Republican Party chairman Zachery Potts.

The tragedy occurred when the driver of another car, 56-year-old Edith Schmucker, crossed the median of Indiana State Road 19 and hit Walorski’s vehicle head-on.

“Jill and I are shocked and saddened by the death of Congresswoman Jackie Walorski of Indiana along with two members of her staff in a car accident today in Indiana,” Biden said at the time.

“Born in her beloved South Bend as the daughter of a meat-cutter and firefighter, she spent a lifetime serving the community that she grew up in – as a journalist, a nonprofit director, a state legislator, and eventually as a Member of Congress for the past nine and half years,” he said.

“We may have represented different parties and disagreed on many issues, but she was respected by members of both parties for her work on the House Ways and Means Committee on which she served,” Biden said. “She also served as co-chair of the House Hunger Caucus, and my team and I appreciated her partnership as we plan for a historic White House Conference on Hunger, Nutrition, and Health this fall that will be marked by her deep care for the needs of rural America.”

The flag atop the White House was also flown at half-staff for two days after Walorski’s death. 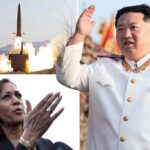