President Biden looked lost in the woods during a tree-planting ceremony on the South Lawn of the White House on Monday when staffers needed to point him in the right direction.

The 79-year-old president and First Lady Jill Biden had just planted a tree in honor of groundskeeper Dale Haney’s 50 years of working at the White House.

The president then walked off into the garden before turning around and asking, “Where are we going?”

Staffers are heard off camera telling a baffled Biden how to get back inside the White House.

“What if I want to go that way?” the president appears to ask at one point, to which someone responds off camera, “You can go that way if you want.”

“You can do whatever you want,” another staffer assures the president.

“Yeah, I notice how much freedom I have,” Biden appears to joke as he joins his wife and starts walking in the correct direction.

The commander-in-chief — who turns 80 next month — spun around on stage searching for the exit before finding it and hustling off stage, appearing to mumble to himself in the process.

Biden also confused onlookers and his handlers alike as he wandered away from the podium during a speech at FEMA headquarters about the devastation caused by Hurricane Ian.

During an interview with MSNBC last week, the president also appeared to zone out during a question about what his wife thinks of him running again in 2024.

“Mr. President —,” MSNBC’s Jonathan Capehart interjected after being met with a long, awkward silence after asking the president the question.

In April, Biden also appeared to get confused onstage after a speech, extending his hand to no one after completing remarks to students at North Carolina Agricultural and Technical State University in Greensboro.

There was no one else on stage and no one from the applauding crowd approached the president when he appeared to try and engage in the handshake, footage from the event showed. 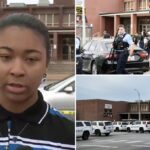 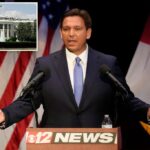