Beverly Hills police are investigating a batch of antisemitic flyers that were disbursed throughout the north end of the city.

The flyers, left in an area north of Sunset Blvd. and west of Benedict Canyon Dr., included antisemitic tropes and blamed gun control on Jewish people.

Sgt. Scott Dibble said the disbursement did not pose a “significant threat” and said the effort was “very minimal.”

The flyers were found a day after the anti-Jewish group Goyim Defense League unfurled a banner on a Los Angeles freeway overpass praising Ye, the rapper formerly known as Kanye West, for his recent slew of antisemitic remarks.

The Anti-Defamation League of Southern California called the display an “outrageous effort to fan the flames of antisemitism gripping the nation.”

It was not clear if the group of demonstrators on the freeway overpass was the same group who disbursed the antisemitic flyers. Fox News has reached out to the Beverly Hills police department for comment. 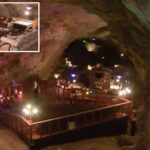