It’s not like finding a needle in a haystack.

An Australian police department was roasted for requesting civilian help spotting a suspect whose entire face is plastered with a massive “beast” tattoo.

On the run after skipping a hearing on charges of domestic violence assault and property damage, Sutton blacked out his entire face in tattoo ink with the word “beast” scrawled across his forehead — and has a slew of other tats all over his body.

The plea got little sympathy — and a lot of sarcasm — from an incredulous public.

“I don’t think I’d recognize him if I passed him in the street,” one FB respondent joked.

“Keep your eyes open for this man. He’ll be extremely hard to spot in a crowd,” another snarked.

“I reckon he could wear a balaclava and we still could recognize him,” a woman added, referencing the outerwear that covers the entire head and face except for the eyes.

Others sarcastically inquired about more details to help identify him, like his height, clothing and eye color.

“I’m gonna need a description if you want my help to find him,” one FB user wrote.

Then there were the critics who mocked the quality, content — and font — of Sutton’s tats.

“It reminds me of doing a poster in primary school!” one poster wrote.

“Did this bloke pass out and get attacked by a sharpie?” yet another penned.

The weekly alert from the police — Warrant Wednesday — has been jokingly labeled “Tinder Day” by some female respondents, who have been known to tag each other in mock excitement over their “favorite day of the week” to find men.

“I wonder who great looking guy will be up this week,” one wrote in anticipation of Warrant Wednesday, to which another woman later responded: “Check out James Sutton and his tasteful tatts!!!!”

There were some serious critics as well, ragging the police department itself.

“You need assistance to find a person with the word BEAST tattooed on his forehead?” one outraged citizen wrote.

“If they can’t find a bloke looking like this, they should be sacked!” another suggested. 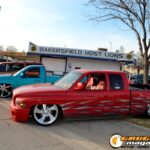 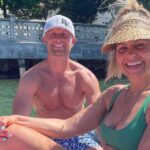 Sex Life With Valeri Is ‘Healthy