Opening up. Aubrey O’Day got candid about her relationship with the daughter of her ex, Paul “Pauly D” DelVecchio Jr., during an exclusive interview with In Touch while promoting her upcoming single, “Couple Goals” – and she addressed comments that Pauly said he wished she had “never met his daughter,” Amabella.

“He said that in multiple interviews – that he’d be careful next time and never be, like, careless about who gets to meet her, as if I played a negative role or no role in her life,” Aubrey, 38, tells In Touch, referencing a lyric in her new song. “And I won’t ever get into details about my relationship with another man’s child with someone else because I don’t think there’s integrity in that.”

The former Danity Kane artist went on to explain that she can only describe the situation “through my lens and my eyes only,” adding: “I loved that child. There were many things that I taught her and there were many ways that I made her a neater human being when she and I would be alone spending time together. And I’ve never seen anyone betray the truth so flagrantly. It was very hurtful and I didn’t deserve it.”

The “Love Me When You Leave” songstress then noted she turned to prescription medication – Ambien, in particular – as a way to escape from the pain. “I took Ambien and I went back to sleep,” she says of how she reacted to Pauly’s comments. “That’s what I did for a good amount of COVID because I couldn’t do anything without seeing Jersey Shore on a billboard outside my home. I became dependent on being able to escape from the pain because it was so painful. My heart broke so deeply that I couldn’t do anything but take a pill, take a pill and go to sleep.”

Aubrey addresses her and Pauly’s tumultuous relationship in her new single, “Couple Goals” – which is set to drop on Monday, November 21, along with an accompanying censored nude music video. The uncensored version will be available on her OnlyFans the same day.

The Ex on the Beach alum went on to say that she hopes sharing her story through her music will inspire others – no matter what they’re going through in their lives. “I was able to find myself because I betrayed myself,” Aubrey explains. “I was able to get closer to integrity because I was operating without it. I was able to get better, but it took a while and I really hurt my body with medication to escape the pain.”

She continues, “A lot of people take Ambien and a lot of people use it to escape. And I want to be a voice to those people because it can become very addictive to needing that escape. I had to completely shift over to alternative medicine to break the pattern of big pharma and its impact on allowing me to escape. I was taking a lot of medication because what he was doing was murdering my soul.”

A rep for Pauly D did not immediately respond to In Touch’s request for comment. 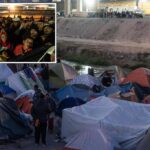 ‘Avalanche’ of immigrants wait to enter US when Title 42 ends 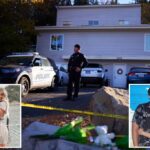 Roommates of slain Idaho students may be ‘key’: officials