A local Georgia lawmaker has come out as nonmonogamous and revealed plans to start a family with her two female partners, declaring “I’m in love with two wonderful people.”

Atlanta City Council member Liliana Bakhtiari, who became the first gay Muslim elected official in the state when she was voted in last year, disclosed her relationship status in an interview with NBC News on Wednesday.

Bakhtiari said she had already been with her partner, Kris Brown, for almost a decade when she met Sarah Al-Khayyal in late 2020 through a virtual nonmonogamy support group.

The trio then embarked on a relationship that they opted to keep secret — even throughout Bakhtiari’s local election campaign.

Bakhtiari, who is also non-binary and goes by both she and they, said she wanted to come out about her relationship on her own terms to avoid a “scandal” as they plan to build a family together.

“We’re openly showing it and proud of it,” Bakhtiari said of their relationship.

“It should be destigmatized. It’s a very valid familial structure that people should embrace.”

While the lawmaker’s term isn’t up until 2026, Bakhtiari is already predicting that their nonmonogamous relationship may affect her chances at re-election.

“If people don’t want to re-elect me because I’m in love with two wonderful people and in a happy and healthy relationship that is possibly the greatest thing that’s ever happened to me, then I’m good,” Bakhtiari said.

The trio, who prefer the term nonmonogamy rather than polyamory, admitted in the interview that hiding their relationship for two years was difficult given Bakhtiari’s very public life.

“This is the sort of thing that a political opponent or someone who has some ax to grind might pick up on and twist around and turn into something negative, and we want to claim it upfront, and say this is the best thing about our life,” Brown said.

Bakhtiari added that when others do find out about their circumstances, they are often hit with a barrage of questions, including: “Who do you love more? Do you all sleep together? What happens? What are the rules? Don’t you have to choose?” 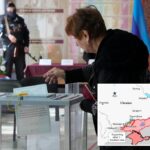 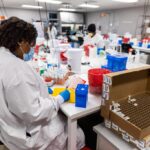