Happily ever after. Ashley Olsen married “best friend” and longtime boyfriend Louis Eisner in an intimate ceremony, In Touch can confirm.

“Ashley has been waiting for this day for a very long time. She married her best friend, and she couldn’t be happier,” a source exclusively tells In Touch of the Full House alum’s relationship. “Even though they’ve been together for over five years, she and Louis never flaunted their romance. They’re very private, but friends say they’re looking forward to being one of New York’s power couples and eventually starting a family.”

The actress, 36, and her artist beau, 34, were first linked in 2017 after reportedly meeting through mutual friends. Four years after making their debut as a couple, the pair stepped on the red carpet for the first time at the Young Eisner Scholars’ 20th anniversary celebration in Beverly Hills, California, in September 2021.

​​“Ashley is still dating Louis,” a separate source told In Touch in June 2021. “He doesn’t crave the spotlight, so that’s a huge plus. And her twin sister, Mary-Kate [Olsen], adores him.”

Despite keeping their relationship out of the public eye, Ashley and Louis sent engagement rumors flying when the It Takes Two star was spotted wearing a gold ring on her left ring finger in May 2022. After more than five years together, on January 4, Page Six reported that the pair tied the knot in a private Bel-Air ceremony days before the new year.

“The wedding was relatively small for a multi-millionaire,” the insider tells In Touch of their private nuptials, adding that “Ashley and Louis don’t like over the top extravagance.”

“It was at a friend’s or family member’s home in Bel Air, very classy, about 50 guests and I heard she wore a long white dress that looked [like] vintage couture,” the source continues, “She looked gorgeous. Her sisters Mary-Kate and Elizabeth [Olsen] were in attendance. It was all very hush-hush, but no one expected anything less from her.”

As for the newlywed’s future, the insider notes that “Ashley’s always dreamed of having two kids.”

A rep for Ashley did not immediately respond to In Touch‘s request for comment. 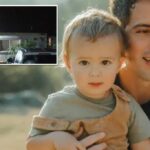 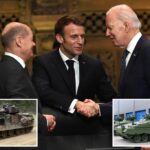 US, Germany and France to send fighting vehicles to Ukraine