Back on. Former Seeking Sister Wife star Ashley Snowden confirmed she and her estranged husband, Dimitri Snowden, are back together nearly one year after their split.

“So I’m actually not single anymore,” Ashley, 36, said in a statement. “I have briefly mentioned in the past about reconciliation with Dimitri and that has also been something that has been a blessing and it’s specifically tied to my faith walk with Christ. And just like, understand this concept of like, this … responsibility of forgiveness, OK?”

She continued, “We want God to forgive us for the things that we do and the heard heart that we’ve had, and yet we are so unwilling to forgive each other. People really struggle with forgiveness and I get it because it’s just some dark matter, right? It’s some dark matter that we’re dealing with in this world and I know that I’ve done some things in my life that I would want people to forgive me and who am I not to forgive someone else?”

“And so, when I think about just the mercy and the grace that God has had on my life and when I think about my family and my children and when I think about just this world that we’re living in and the transformation and the transitions and all those things that I’ve gone through and I want the same for him,” Ashley added. “I want to give us that chance and it wasn’t an easy choice. It wasn’t like, ‘Oh yes, let’s go, let’s get back into the saddle.’ No. It’s taken us time, therapy, interaction, it’s taken tears, it’s taken acknowledgement, it’s taken apologizing and going back over some of the stuff that you just don’t want to go over. Like, it’s taken so much and that healing had to happen at the same time where our names [were] being dragged through the mud separately and together.”

Ashley went on to defend her husband, with whom she shares three children, from the backlash he’s gotten online from fans of the show. “I just feel like at this point in my life, I can’t carry anger and resentment and hurt and pain any longer. There’s no room for that. He’s a good human being, no matter what you may have heard or read or what you think you see or saw,” she said. “I know who I chose and why I chose him and this part of my journey has taught me to tap back into that. But first, I had to go away. I had to literally die. I had to die that death and just like, bury that part of me that became the seed. That part of me that was a seed, I had to just bury that. God watered it and here we are.”

The former TLC star confirmed she reconciled with Dimitri, 40, in August. Her announcement came more than one year after she confirmed she and her husband of 12 years split in July 2021. “I’m single and grateful for life,” she wrote at the time, following several months of split rumors.

Dimitri and Ashley made their reality TV debut on season 1 of Seeking Sister Wife. The polygamous couple returned for seasons 2 and 3 of the hit TLC series to share their journey as they set out to find second and third wives for Dimitri and sister wives for Ashley. The couple last appeared on the show in June 2021. 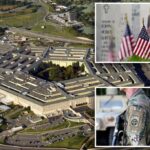 Troop suicides drop from 2020, but still up over decade: Pentagon