Frantic residents of an Arizona suburb are hoarding water after nearby Scottsdale cut them off from future deliveries at the beginning of the New Year, according to a report.

Citing a worsening drought, city officials said they could no longer provide water to roughly 1,000 denizens of the Rio Grande Foothills.

“There is no Santa Claus,” Mayor David Ortega said in a blunt statement last month, according to Scottsdale.org. “The mega-drought tells us all – water is not a compassion game.”

The community, located just a few miles outside the affluent town’s limits, had previously purchased water from the municipality and could rely on a steady supply.

But as the drought has worsened, Scottsdale officials have said they need to keep their water, and have turned off the stand pipe which was supplying the community as part of its Drought Management Plan.

With deliveries now halted, occupants of around 700 homes — many of them worth over $500,000 — are suddenly facing an acute dry spell.

According to the New York Times, troubled homeowners have tried to preserve as much water as possible, skipping showers, using paper plates to avoid dishwashing, and collecting rainwater.

She told Scottsdale.org: “That will last me two months. I plan on showering at our health club to make it last longer.”

Faced with the prospect of parched properties, residents are also bracing for their home values to plunge into the ground.

While proposed subdivisions with six or more lots are required to demonstrate a reliable water source for 100 years in the area, developers have eluded the restriction by building smaller communities of just a few houses.

“We have about five to seven days of water left,” resident Wendy Walk told News 12. “My community is beautiful. It’s the most special place in Arizona. And if it doesn’t have water, almost a thousand homes, it’s going to die. I just hope our neighbors in Scottsdale see this and want to help.”

Residents of the stricken enclave have taken to protesting at Scottsdale City Hall during official meetings to amplify their plight.

“Stop the cruelty! Give us our water!” one placard read.

Father-of-four Cody Reim, claimed his monthly water bill is about to increase by an enormous amount, going from an average of $220 a month to over $1,000 for water hauled in on trucks. Since Scottsdale has closed the closest stand pipe, the trucks will have to haul from much further away.

But some of the city’s residents have bemoaned their own limited water supply in declining to budge on the matter thus far.

Sarah Porter, head of the Kyl Center for Water Policy at Arizona State University, warned that the nation’s water woes are likely only beginning.

‘We can’t just protect every single person who buys a parcel and build a home,” she told the Times. “There isn’t enough money or water.” 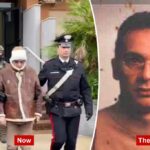 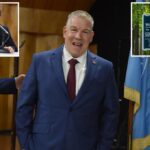