A quick-thinking Arizona father saved his 12-year-old daughter after she was struck by lightning Saturday — resuscitating her three times with the help of the Bee Gees’ hit song “Stayin’ Alive.”

Steve Jorgensen and his daughter Ella were playing outside in the rain in the state’s West Valley, when lightning struck either the girl or the ground next to her, Fox 10 reported.

“It was a super, super bright, loud crash that cracked,” Jorgensen said.

Ella dropped to the ground and her heart stopped beating. Jorgensen dove to the ground and immediately began chest compressions to the tune of “Stayin’ Alive,” a skill he learned during his time in the military.

“I got her heart back going. Got her breathing [for a] short amount of time, so I lost it again,” said Jorgensen.

“You could hear me singing the Bee Gee’s ‘Staying Alive’ as I was giving her a resuscitation and then finally I got her going,” Jorgensen said, according to AZ Central.

Ella’s heart stopped beating three times, but her father was able to revive her each time until emergency responders arrived and took over.

The young survivor came out of the ordeal with no memory of the strike but was left with just a small injury: a burn on her neck left from a necklace she was wearing that broke when she was struck. Plus, a unique story.

“Once we got the tubes out, and her mom told her again, she just looked at her mom, hugged her and said ‘I’m going to have a cool story forever now,’” Jorgensen said.

Doctors said Jorgensen is the reason his daughter survived the lightning strike. He sustained his own injuries in the rescue — two scraped knees — which were of no consequence to the heroic father. 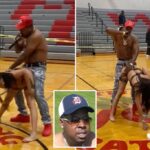 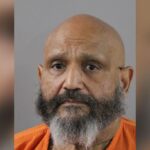 Gino Colonacosta and son shoot at woman they suspect was burglar