New item? Cher and Amber Rose’s ex-boyfriend Alexander “AE” Edwards sparked dating rumors after they were spotted holding hands and getting cozy. The pictures appeared online more than one year after Amber publicly accused AE of cheating on her with multiple women nearly two years after the former couple welcomed their son, Slash.

Keep reading to find out everything we know about Cher and AE’s relationship.

The Goddess of Pop and the A&R Def Jam vice president were seen walking into the West Hollywood celebrity hotspot Craig’s on November 2, according to photos published by Page Six. The outlet reported that the duo were seen getting cozy, with AE reportedly kissing Cher’s hand while they were in a car together.

Cher and AE even had matching outfits, as both donned black leather ensembles during their night out. While dining at Craig’s, they met up with another famous name, Kylie Jenner’s ex Tyga.

Just six days prior to their dinner, the Daily Mail reported that Cher, Ae and Tyga were seen at Cher’s Malibu home.

Reps for Cher and AE did not immediately respond to In Touch’s request for comment. They have not publicly addressed the rumors.

What Did Amber Rose Say About Alexander ‘AE’ Edwards?

Amber and AE were in a relationship from October 2018 until August 2021, when the How to Be a Bad Bitch author wrote a scathing statement via her Instagram Stories calling out AE for their split.

“I’m tired of getting cheated on and being embarrassed behind the scenes,” Amber wrote that month. “All 12 of [you] bums (the ones that I know of there’s probably more) can have him. Y’all very much knew he was in a relationship with a baby, and y’all decided to f—k him anyways. I saw all the texts and DMs.”

She continued, “Y’all were well aware, but y’all don’t owe me any loyalty. So, it’s whatever. I can’t be the only one fighting for my family anymore. I’ve been so loyal and transparent, but I haven’t gotten the same energy in return. As for him … the lack of loyalty and the disrespect is ridiculous. I’m done.”

Just one day after seeing his ex’s public accusations, AE admitted to cheating on Amber in an interview with Entertainment Tonight.

Despite Amber’s noticeable frustration at the situation, AE insisted he didn’t hold any grudge against her for publicly calling him out.

“And she’s just had enough, obviously,” he added. “I love her, though. That’s, like, my best friend, the mother of my son.” 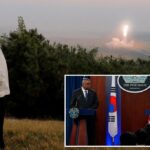 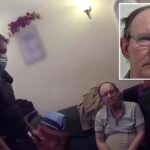