Rep. Alexandria Ocasio-Cortez said she’s working with Mayor Adams to apply for more federal housing funds to help the Big Apple address the migrant crisis — but refused to call on President Biden to secure the border and instead welcomed the surge of asylum seekers.

The congresswoman said she’s working with City Hall on applying for grants through the Office of Housing and Urban Development.

“So they are working with that application on emergency housing services.  We have a housing crisis in this city. There are many ways we need to respond to it,” Ocasio-Cortez said during a Wednesday night town hall meeting in The Bronx.

“We are in close communication with the mayor’s office and getting the resources necessary.  If some states don’t want to do their job on that, that’s fine.  But then those federal resources should come to New York City, and those federal dollars should come to places that want to take care of people, and we need that financial support.  We are closely monitoring the situation.”

City Hall chief of staff Frank Carone, asked about AOC’s comments, said, “As we navigate this crisis we appreciate the support from our entire congressional delegation who knows full well the resources we need.”

Adams last week declared a state of emergency as the city grapples to absorb 19,000 asylum seekers, including 5,500 mostly Spanish-speaking migrant students who are enrolled in public schools that lack bilingual teachers.

Ocasio-Cortez was asked what she was doing to help secure the southern border to stem the wave of migrants.

“There is no solution. We have foreign nationals by the millions pouring in illegally.  Flooding our country. You are a member of Congress. Writing our immigration laws… What will you do with the immigration law to secure the southern border?” a retired firefighter asked her during the question and answer session.

He argued that 95 percent of the people seeking asylum to the US are “economic migrants” — not politically persecuted foreigners — making them ineligible for political asylum.

“When we talk about undocumented people, my priority is about opening legal pathways to citizenship. And making sure they are open.”

She even blamed the US for instability in Latin American countries that’s driving the wave of migrants to the southern border.

“The US has contributed historically to regime change in Latin America which … has been multi-decade contributing factors to why people happen to be on our southern border right now,” said Ocasio-Cortez, whose bi-county 14th congressional district covers immigrant heavy sections of The Bronx and Queens.

“We don’t want these crises but we need to accept responsibility for our contribution to them.”

It’s a socialist government that heads the reeling country of Venezuela, a US foe.

The congresswoman said the US immigration system is broken, with a  huge backlog for applications for citizenship stretching decades and it’s not’s practical to think asylum seekers can wait on some line.

“If we don’t want people here illegally then we should document them!,” she said.

She said immigration is a plus in the US, noting the population decline in places like Japan because of a lack of immigration.

“In the United States the only reason we don’t have that fate is because we’re a country welcoming immigrants.  We don’t have the capacity to continue to fund medicare, social security, economic growth, without immigrants. No way to make that work,” AOC said.

“This is New York City. This is who we have always been. Look around this room. All of us come from somewhere. We can’t close our eyes and pretend those coming here for new opportunities are any different from Italian and Irish Americans coming here in 1910.”

Last month, Ocasio-Cortez accused the Republican governors of Texas and Florida of committing “crimes against humanity” for busing migrants from the southern border to liberal cities like New York — though it turns out that Democratic mayors in border towns including El Paso were doing the same. 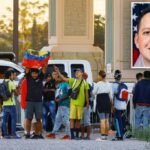 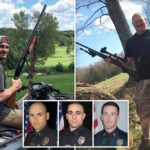