Fake German heiress and convicted fraudster Anna Sorokin insisted Wednesday she wants to stay in the United States as she fights overseas deportation to “prove people wrong” and “change the narrative” of her socialite scamming.

“I feel like if I were to leave and say ‘oh whatever I’m just going to move on and like move to Europe’ I would be like accepting the labels that they are trying to slap on me,” Sorokin told CNN’s Jake Tapper in a sit-down interview.

Sorokin, who went by Anna Delvey before her arrest, discussed her quest for a new chapter in the US from her East Village apartment where she’s on house arrest after being released from US Immigration and Customs Enforcement custody Friday.

She told Tapper she was “so happy” to be released from custody in upstate Orange County even though she can’t leave her home and needs to sport an ankle monitor.

“I feel like I’m getting a second chance to fix my mistakes,” said Sorokin, who can only leave for appointments with her parole officer or immigration officials and is prohibited from using social media.

She blamed the prosecution in her 2019 trial and the media for how she’s portrayed as an epic scammer who stole more than $200,000 from financial institutions and businesses.

“They kind of created this idea of me and I’m just being left to deal with it,” Sorokin said.

“I’m trying to not glamorize my crimes and not lead anybody to believe that’s the way to get famous,” Sorokin added. “Because I suffered a lot as a result … even though I don’t always show it. I’m not going to go on TV and cry.”

She also told Tapper she was sorry for a lot of the choices she made, though she then admitted she has not reached out to anyone directly to apologize.

When Tapper asked if she had apologized to anyone, she only mentioned her statements in court and then noted the charge in court connected to allegedly stealing from one friend led to an acquittal of that count.

“Everybody else is a financial institution,” she insisted.

When Tapper pressed if she actually regretted her actions, she agreed she “definitely did” take advantage of people.

“And I was younger and I learned from my mistakes,” Sorokin said.

She insisted she never wanted to be famous, only an influential businesswoman. She doubts she’d get the same level of attention for her crimes if she committed them in her native country, a nod to Americans’ interest in world-class scammers.

“I was thinking if I were to be prosecuted in Germany, I don’t think people would really care,” Sorokin said.

Sorokin was spotted out Tuesday as she made her way to see her parole officer in Brooklyn ahead of a check-in with immigration officials in Lower Manhattan, her spokesperson said.

Her scheme of conning New York’s elite was the basis for the Netflix show “Inventing Anna” where the convicted felon was paid more than $300,000 for the rights to her story. She told Tapper Wednesday she only watched about 30 minutes of the it.

She was found guilty of tricking banks and businesses out of more than $200,000 in 2019, and was released from prison in 2021 for good behavior.

Weeks after she was released from prison for good behavior, Sorokin was taken into custody by immigration officials and tossed in the Orange County Correctional Facility before she clinched her release last Friday.

She also told Tapper she was “getting used” to her ankle monitor and is unsure how long she will be on house arrest.

“Hopefully I will be known for some of my legit projects,” Sorokin said. 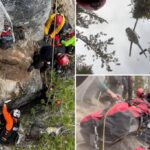 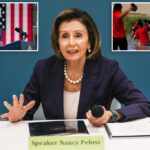