Keeping her distance? Counting On alum Joy-Anna Forsyth (née Duggar) hosted a gender reveal party for friends and family, but sister-in-law Anna Duggar was seemingly absent from the celebration.

“We got the results back from our ultrasound last week. And so, we were kind of like, should we go ahead and throw the gender reveal party or should we wait until the new year?” Joy, 25, said in a YouTube video shared on Friday, November 18. “But it ended up working out for most of the people that we wanted to come to just go ahead and do it the week before Thanksgiving.”

Joy-Anna’s sisters Jana Duggar and Jill Dillard (née Duggar), as well as sisters-in-law Abbie Duggar and Katey Duggar, were in attendance to celebrate Joy’s third child with husband Austin Forsyth. Jim Bob and Michelle Duggar were also there to find out if their 30th grandchild will be a boy or a girl.

Anna’s apparent absence from the family affair comes just one month after In Touch exclusively revealed that Josh Duggar’s wife still holds resentment towards her sisters-in-law after they spoke out during her husband’s child pornography trial.

“It started after some family members spoke out about Josh’s arrest,” a source told In Touch in October of their strained relationship. “It was a nightmare navigating all that. Yes, it was horrible what Josh was accused of, but she needed unconditional support. Anna took it as a betrayal and she’s still not ready to fully forgive some family members.”

The insider went on to note that the mother of seven, 34, was “distancing herself from Josh’s sisters.”

“The Duggar family fully supports Anna, but it’s complicated. There are a lot of hurt feelings over what Josh did,” the insider added. “She still attends family functions because her kids love their cousins, aunts and uncles, but it’s not the same for Anna.”

Despite seemingly missing the celebration of Joy and Austin’s baby boy, Anna was present during the Duggar family’s annual fall festival the previous week. She was seen breaking the family’s dress code by wearing jeans in a video shared via Jed Duggar’s YouTube channel on November 11. 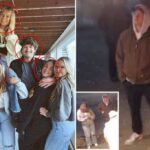 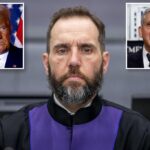