Angelina Jolie and daughter Shiloh Jolie-Pitt, whom she shares with actor Brad Pitt, rang in the new year by taking in a play in London’s West End.

The pair were photographed having a coffee date with actor Paul Mescal, who stars in the production of A Streetcar Named Desire, which Angie, 47, and Shiloh, 16, attended at the Almeida Theatre. The trio got together at the venue’s cafe afterward, where they looked engaged in conversation.

It was strictly a mother-daughter outing, as none of Shiloh’s five siblings were along for the theater date. In a fan’s Instagram photo showing the three deep in conversation, the talented dancer covered her blonde locks with a knit cap while wearing an olive-green jacket. From the smile on Shiloh’s face, she seemed enthralled with what the Normal People star had to say.

Angelina looked flawless in a black coat with her hair pulled back from the sides and resting down her back. She too appeared deeply interested in their chat with the handsome Irish actor.

While Shiloh enjoyed her day at the theater, she hasn’t made any steps towards following in her parent’s footsteps into acting. However, she has blossomed into a very talented dancer. In May 2022, a now-viral TikTok video of Shiloh dancing a routine set to Lizzo’s “About Damn Time” blew away fans, along with further freestyle dancing videos that followed.

Brad, 59, isn’t sure where his eldest biological child got her dancing talent, but he’s completely moved by watching her do something she loves so much.

“It brings a tear to the eye, yeah,” the Bullet Train actor told Entertainment Tonight at the movie’s Los Angeles premiere on August 1, 2022, adding, “I don’t know where she got it from. I’m Mr. Two-Left-Feet here.”

The Oscar-winning actor and producer said that he “loves” when his kids “find their own way, find things they are interested in and flourish.”

A source told In Touch in March of that year that Shiloh was “really good” at dancing, referring to it as “her main love right now.” The insider added, “She loves that she can feel the music, let go and be free, which is super important. She likes all styles of dance but hip-hop and freestyle are her favorites.”

The source explained that Shiloh is able master routines quickly, “which Angie loves because she says that neither she nor Brad have that talent.” They also shared, “Shiloh really can move. Angie and Brad are impressed, they couldn’t be prouder.” 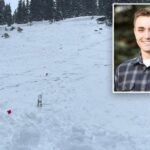 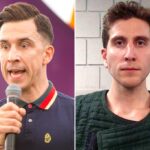 Comedian keeps getting tagged in pics of murder suspect