Controversial influencer Andrew Tate’s arrest Thursday has won a humble Romanian pizza chain a legion of new fans — who rushed to express their appreciation for the business in the form of hilarious 5-star online reviews.

Tate, 36, and his brother, Tristan, were taken into custody at his villa in a suburb of the Romanian capital city of Bucharest on charges of rape and kidnapping.

The siblings’ arrest came shortly after Tate posted a video online trolling climate activist Greta Thunberg after the two engaged in a testy back-and-forth about car pollution on Twitter earlier this week.

In the video, Andrew Tate is handed two pizza boxes from Jerry’s Pizza, which is local to Romania, while telling someone off camera to “make sure that these boxes are not recycled.”

The boxes with the pizza chain’s logo allegedly allowed Romanian police to pinpoint Tate’s location, leading to his capture.

Within hours, the Google page for Jerry’s Pizza was flooded with hundreds of gushing reviews.

“Pizza so good you’d incriminate yourself for it,” one internet wit wrote.

“The pizza is so unique that people can tell what country it’s from. Andrew Tate learned that the hard way,” a second reviewer gushed.

As news of the Tate’s arrest continued to reverberate through the news media, even more amateur comedians flocked to Jerry’s Pizza’s page to poke fun at the notorious self-proclaimed misogynist’s plight.

“Quality pizza and outstanding performing in taking down [an] international human trafficking’s ring,” one reviewer raved.

“Pizza is so good, you even get a free cop with every order!” another wrote.

One of the reviews concluded: “Pizza worth doing time for. Be sure to ask for the Karma special.”

Even the owners of Jerry’s Pizza got in on the fun, tweeting early Friday a photo of one of their now-infamous pizza boxes and writing in the caption: “the reason we are the most wanted pizza.”

But arguably the best response to Tate’s arrest came from Thunberg, who crowed in a tweet: “this is what happens when you don’t recycle your pizza boxes.”

Tate, a Chicago-born dual British-US citizen who’s lived in Romania for the past five years, is accused of being part of a human trafficking ring that recruited a half-dozen women who were subjected to “acts of physical and mental coercion,” sexually exploited and forced to perform in pornographic videos, according to the Romanian law enforcement agency DIICOT.

Authorities confirmed that they arrested two British citizens and two Romanians as part of the organized crime investigation.

Although DIICOT’s statement did not name the Tate brothers, photos released by Romanian news outlets showed Andrew being led away in handcuffs.

The quartet of suspects were detained for 24 hours, allowing Romanian law enforcement to raid five homes and seize evidence, including weapons, in connection with the probe.

On Friday, Tate cryptically tweeted that “The Matrix sent their agents.”

The former kickboxer, born Emory Andrew Tate III, was only reinstated on Twitter last month after being booted from the platform for saying that women should “bear responsibility” for being raped.

Earlier this week, Tate got into a war of words with the 19-year-old Thunberg when he tagged her in a post bagging about his 33 cars and asking her to give him her email address so he could tell her all about his vehicles’ “enormous emissions.”

Thunberg responded Wednesday with a savage clapback, tweeting at Tate: “yes, please do enlighten me. email me at [email protected]”

The eco-activist’s brutal burn immediately went viral and has drawn more than 248 million views as of Friday.

Tate’s next move was to release the video featuring the fateful, regionally specific pizza box, which ultimately led to his arrest.

Tate and his brother were previously questioned in April about the human trafficking allegations but released without charges. 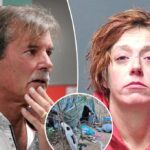 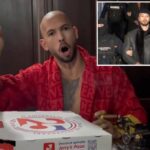