A court in the country’s capital Bucharest rejected Tate’s request to overturn a judge’s earlier decision to keep him behind bars for 30 days following his Dec. 29 arrest.

With Tuesday’s ruling, Romanian prosecutors can now request officials keep Tate in detention for up to 180 days.

Tate was arrested on charges of being part of an organized crime group, human trafficking and rape. His original arrest period was just 24 hours until the judge extended it out of suspicion he — with his brother Tristian and two Romanian women also charged in the case — would flee the country.

But the court ruled Tuesday to uphold the judge’s decision that “the possibility of them evading investigations cannot be ignored,” and that they could “leave Romania and settle in countries that do not allow extradition.”

Representatives for Tate did not immediately respond to The Post’s request for comment.

Prosecutors have already seized 15 luxury cars, at least seven of which belonged to the Tate brothers, and over 10 properties or land owned by companies registered to them, said Ramona Bolla, a spokesperson for Romanian anti-organized crime agency DIICOT.

The officials could use those assets to “cover the expenses of the investigation and damages to the victims” if prosecutors can prove the Tates made money through human trafficking, Bolla said.

One of the cars seized was a $2.9M Bugatti that Tate used to taunt environmental activist Gerta Thunberg just days before Romanian officials raided his villa.

The 36-year-old influencer, who was born in the US and has British citizenship, had been under investigation by authorities since April.

The CIICOT has identified six victims who were subjected to “acts of physical violence and mental coercion” and were sexually exploited by the members of the alleged crime group.”

The women claim they were lured by false pretenses of love before they were intimidated and surveilled by Tate and his group. Some women working for accused sex trafficker were branded with permanent “owned by Tate” tattoos, a report claimed.

Other accusers claim they were never victims of Tate and that the Romanian “case is basically built on lies.” 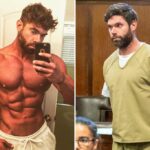