The 36-year-old social media influencer — once banned from Twitter for saying women should “bear responsibility” for being sexually assaulted — was arrested in Romania Thursday on human trafficking and rape charges.

A divisive chauvinist who has previously slammed women as “intrinsically lazy,” Tate appeared to mock the accusations he faces after being detained, along with his brother Tristan, for 24 hours outside Bucharest.

“The Matrix sent their agents,” the British-American conspiracist tweeted to his 3.9 million followers early Friday.

Romania’s anti-organized crime agency announced late Thursday that four suspects, including two British citizens and two Romanians, had been brought in for sexually exploiting women. No detainees were identified by name, but an agency spokeswoman confirmed that Andrew and his brother, Tristan Tate, had been arrested.

“Victims were recruited by British citizens by misrepresenting their intention to enter into a marriage/cohabitation relationship and the existence of genuine feelings of love (the lover boy method),” Romanian authorities said in a statement Thursday.

The six victims were taken to homes in Ilfov, north of Bucharest, where they were put under “constant surveillance,” authorities said.

The women were then “sexually exploited” and forced to perform pornographic acts intended to be posted on social media platforms, according to Romanian officials.

The four suspects, including the Tate brothers, were also charged with rape after an injured woman reported being sexually assaulted on two occasions in March.

Before he was a social media influencer dubbed the “King of Toxic Masculinity,” Emory Andrew Tate III was a world light-heavyweight kickboxing champ once known as “King Cobra.” He dominated professional kickboxing starting in 2005, compiling a 76-9 record and two world titles over the next nine years. After a brief stint in mixed martial arts, the 6-foot-3 southpaw now works as a commentator for Real Xtreme Fighting, the largest MMA promotion in Romania, according to his website CobraTate.com.

But Tate was largely unknown outside of fighting circles until his 2016 appearance on the UK version of “Big Brother.” Just days into the show’s production, he was kicked out after the emergence of past racist and homophobic tweets as well as a video showing Tate allegedly hitting a woman with a belt. Further footage shows Tate telling the victim to count her bruises, but both parties reportedly denied any abuse occurred.

After the “Big Brother” rejection, Tate decided to reinvent himself as a hyper-masculine guru, posting online videos advising men to treat women like commodities. He brags about his wealth, shares his “secrets” of success — for a price — and thrives on criticism. “You can’t slander me because I will state right now that I am absolutely sexist and I’m absolutely a misogynist, and I have f–k you money and you can’t take that away,” he said in 2021 on the “Anything Goes With James English” podcast. Tate has cultivated a large following within the online “manosphere” — a group of proud misogynists who see women as inferior objects to be controlled.

“If you put yourself in a position to be raped, you must bear some responsibility,” Tate wrote in October 2017. “I’m not saying it’s OK you got raped. No woman should be abused regardless. However, with sexual assault, they want to put zero blame on the victim whatsoever.”

Tate was subsequently suspended from Twitter but got reinstated in November along with several other once-banned celebrities, including psychologist Jordan Peterson and comedian Kathy Griffin.

He was removed in August from Facebook and Instagram, where he had more than 4.7 million followers. And Tate’s no longer on TikTok, where his ideologies were permanently banned, although countless #AndrewTate clips were still available on the platform as of Friday.

A self-help guru and admitted misogynist, Tate has previously compared women to dogs, saying they’re property of their husbands and belong at home.

“It’s not about being property, it’s about she belongs to him,” Tate said in July.

More recently, Tate took aim at female executives.“Why are all these ‘business women’ and ‘CEO’ chicks married to very rich men?” he tweeted Monday. “Its [sic] almost as if the man pays for their entire lives and their businesses are hobby bullshit.”

Romantically, Tate has been linked to Naghel Georgiana Manuela, who has been referred to by The Sun as “an American businesswoman and influencer.” He has also claimed to have multiple children by multiple women.

The Sunday Mirror reported in June that Tate and his brother had also raked in millions from webcam sites featuring lingerie-clad models that charged customers up to $4 per minute.

Curious visitors to CobraTate.com, which is separate from TatesHustlers.com and its Hustler’s University, are introduced to the so-called “War Room,” a global group with “members, bases and influence” across 70 countries. Membership costs a one-time fee of $4,497.

“Our network contains a varied expertise which allows us to exert influence globally,” the site states. “Every member has either achieved or is working toward the ultimate goal of all intelligent men, freedom in a world of slavery.”

The War Room primarily exists in dozens of channels on Telegram, covering myriad topics including finance, fitness and “biohacking.” It also offers “permanent meet-ups” among members on a daily basis.

The site also hawks exclusive merchandise and supplements — as well as the promise to get rich.

“I teach the deserving the secrets to modern wealth creation,” Tate claims on the site.

“I grew up broke and now I am a multi-millionaire,” he adds. “I teach the deserving the secrets to modern wealth creation.”

Tate and his two younger siblings, sister Janine and brother Tristan (who appeared in Britain’s “Shipwrecked: The Island”), grew up in Goshen, Illinois, outside Chicago, until their parents — catering assistant Eileen Ashleigh and Emory Andrew Tate Jr., a US Air Force sergeant and international chess master — divorced. He later reportedly moved to Luton, England, to live with his mother in her hometown.

At some point, he apparently became entranced by “The Matrix,” the 1999 sci-fi movie starring Keanu Reeves that has been embraced by conspiracy theorists.

“There’s been a small tear in the fabric of the Matrix and out of the billions of people on this planet, YOU are so lucky to see it,” CobraTate.com reads. “Thats [sic] why you are reading this. The blind never read these words.”

Tate is also known online for showing off his ostentatious lifestyle — like the 33 cars he bragged of Tuesday in a tweet trolling climate activist Greta Thunberg.

“Please provide your email address so I can send a complete list of my car collection and their respective enormous emissions,” Tate tweeted.

That prompted Thunberg, 19, to respond Wednesday: “Yes, please do enlighten me. Email me at smalld–[email protected]”

The phallic-themed dig struck a chord with Tate, who tweeted a video response later Wednesday, one day before his arrest. The footage shows the ex-kickboxer puffing on a cigar and asking someone to bring him pizza while making sure the boxes were not recycled.

The two boxes were from Jerry’s Pizza, a local Romanian chain. It has been widely assumed that this led to authorities locating Tate, although his Twitter account has previously revealed he was in Romania on Christmas, days before Thunberg’s tweet Wednesday and his subsequent video response.

“So … Elon Musk let Andrew Tate back on Twitter, and Tate promptly used it to reveal his whereabouts to authorities in Romania who then arrested him,” Takei tweeted Thursday. “All because Greta Thunberg owned him so hard his little wee-wee fell off. Do I have that right? Please say I have that right.”

Thunberg scorched Tate a second time on Friday, tweeting: “This is what happens when you don’t recycle your pizza boxes.”

Attempts to reach Tate’s relatives, including his 61-year-old mother, Eileen Tate, were unsuccessful. His father died at a 2015 chess tournament in California, at age 56. A message left for Tate’s sister, Janine Tate Webb, 32, who lives in Kentucky, was not returned.

Meanwhile, back in the War Room, interested parties are instructed that a member of Tate’s “personally trained special forces” will contact them via email.

“You need us,” the message flatly states. “We do not need you.” 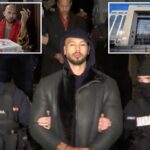 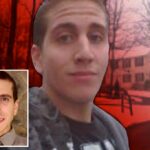